After being mistaken for an engineer, Buster Keaton must electrify a rich man’s house, which he does by filling it with the most wonderful assortment of automated contraptions ever seen on film (or at least since various other Buster Keaton films already released). 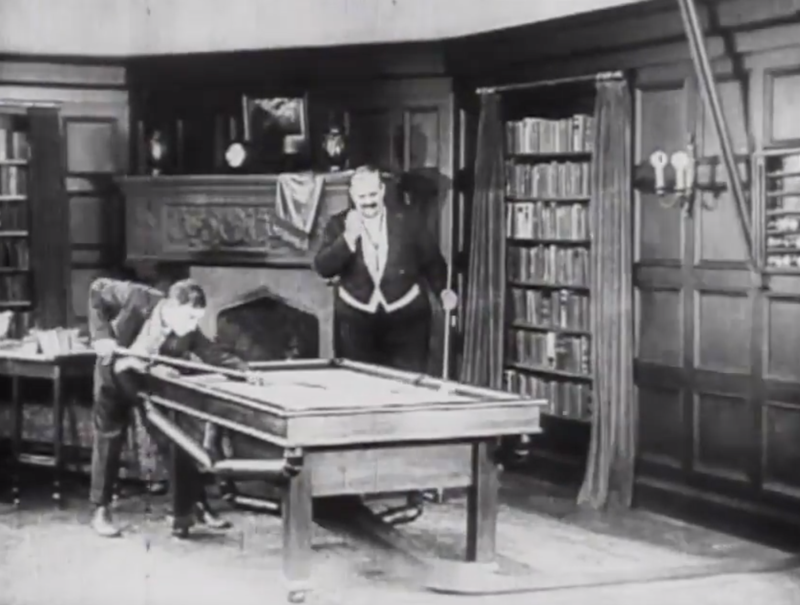 The Electric House is quite similar to a fair few other Buster Keaton films (especially the haunted house sections of The Haunted House), and also reminded me of The Haunted Hotel and Hotel Electrique (not to mention Wallace and Gromit, due to the inclusion of a food delivering train set), but the whole things done with such flair and charm I didn’t really mind. I’m not sure I’ll ever really tire of pointless automated contraptions like this on film. Or Buster being scared of “ghosts”. 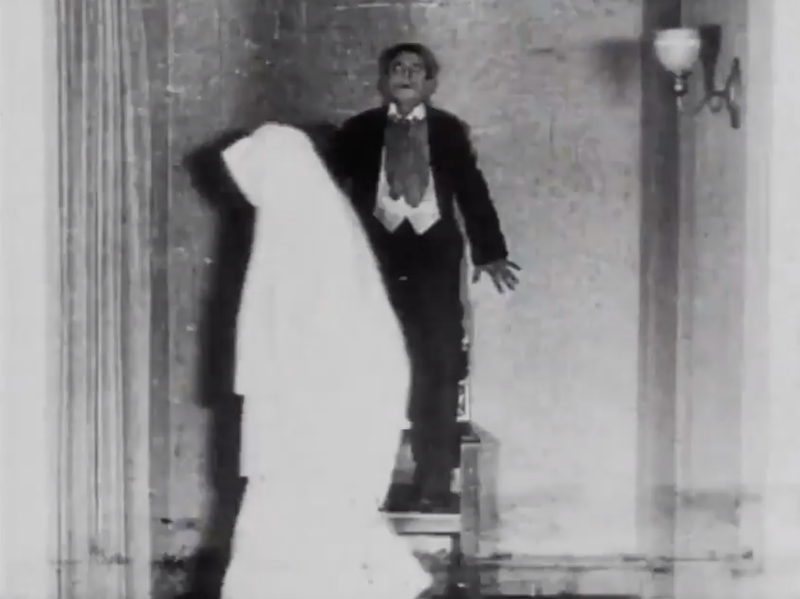 Not only that, but Buster, as always, knows that even the best of premises can be spiced up a little by the entirely superfluous addition of animals, so half way through we get the delightful appearance of these kittens watching a train of food go past. 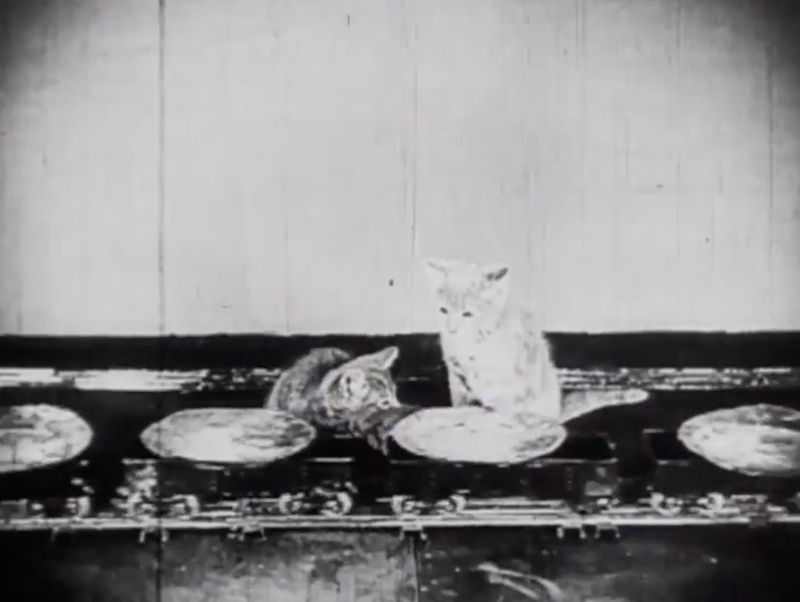 1. I watched this on blu-ray. The screenshots are from a version on youtube.

2. There’s only two more of these Buster Keaton shorts left in the boxset, but they’re both from 1923.

4. Buster is such a temptress.

5. And I am so easily tempted.

In The Haunted House, Buster Keaton gets framed for a crime he didn’t commit and so must go and clear his name. In a haunted house. 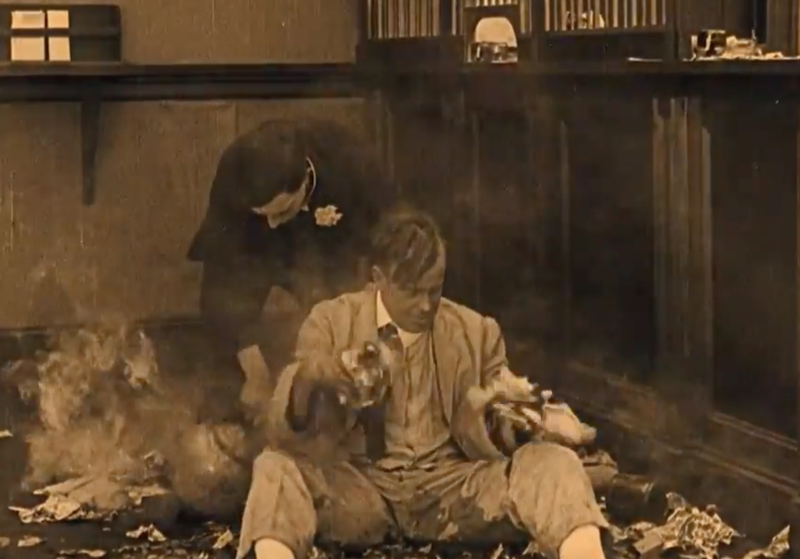 This one starts slowly, with the first ten minutes mostly being devoted to Buster Keaton being covered in glue.. So it’s not until the action switches to the haunted house of the title that things really get going. 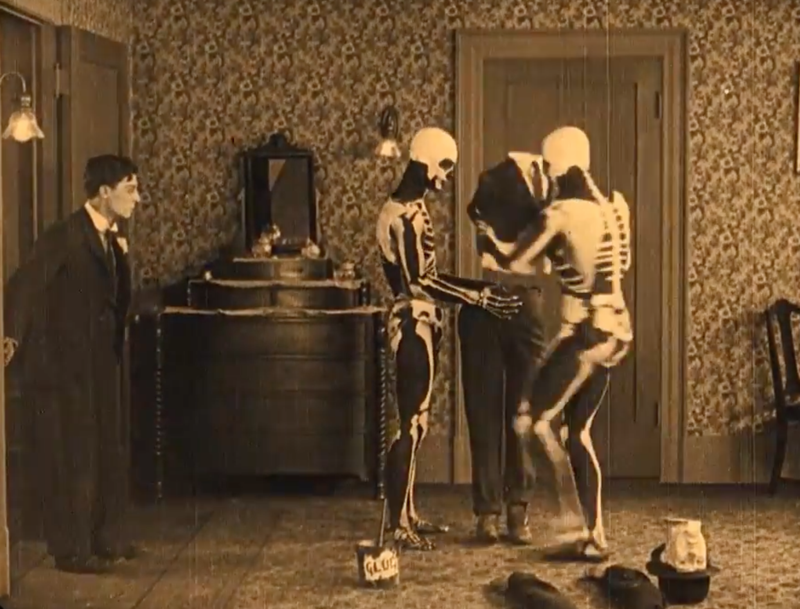 The haunted house is actually just some bank robbers den, which they’ve rigged up as a terrifying haunted house to foil any would be spies/intruders/the police/etc. It’s probably the most convoluted elaborate plan to cover up a crime I’ve seen in a film (or at least since I watched Vertigo recently).

From here until the end, The Haunted House is utterly brilliant in almost every way, and I loved it. Ghosts, skeletons, haunted armchairs, staircases turning into a slide, Buster Keaton looking absolutely furious occasionally, a finale set in heaven and hell. It’s got basically everything you could want from a film. 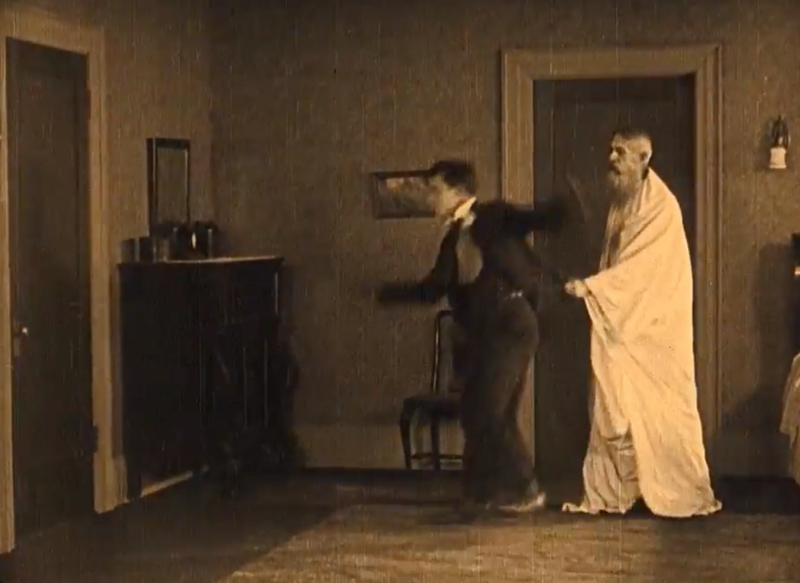 1. I watched this on blu-ray again, and gathered the screenshots form this version on youtube.

2. I genuinely wasn’t expecting just how funny the second half of this would be.

4. I think the first half had set my expectations quite low.

5. Especially as the elongated glue scene played like some sort of extended anxiety nightmare.

7. Obviously I suffer from some sort of repressed glue fear.