Haxan is a 1922 documentary directed by Benjamin Christensen that explores and depicts the history of witchcraft and witch hunts in the middle ages. 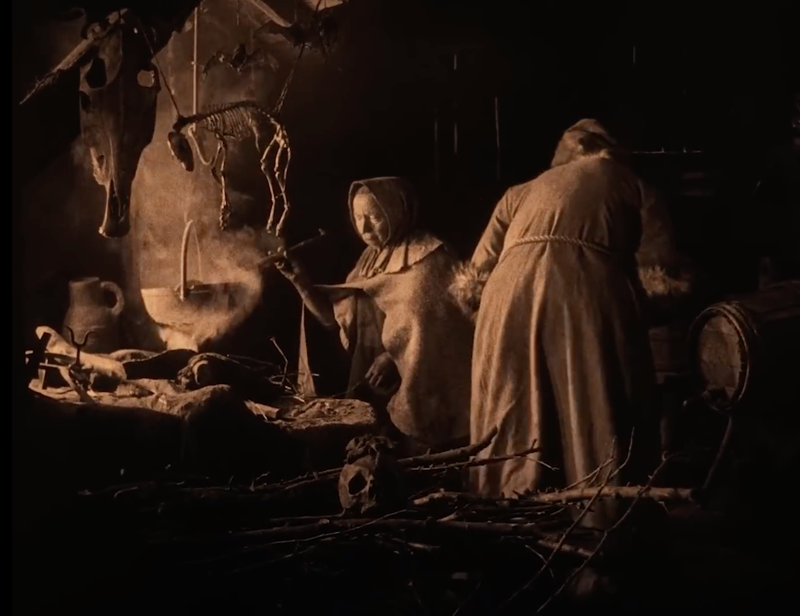 Using various devices such as stills of medieval woodcuts and manuscripts, dramatisations of actual events, recreations of recollections, stop motion animations, and some pretty lurid sex and nudity (by 1920s standards, at least), Haxan isn’t so much a documentary as a near two hour nightmare, surprisingly unsettling in many ways, not least the wholly demented behaviour of the witch-hunting clerics and monks. 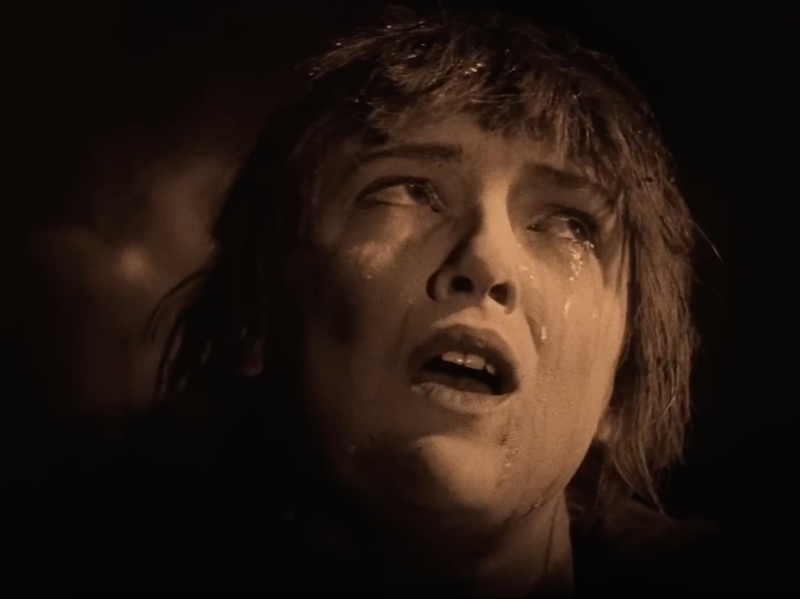 This was banned on release across a lot of Europe, and in America too, just as much for it having the temerity to portray the church as absurdly evil as for its nudity and naughtiness (there’s a wonderful scene of the witches all giving Satan a surprisingly chaste kiss on the arse).

Even a hundred years later there’s still a strange, mesmerising power to its imagery, the ferocity of the performances and the sheer strange delight in some of the black mass scenes that’s kind of unsettling, a weird energy that’s impossible to ignore. 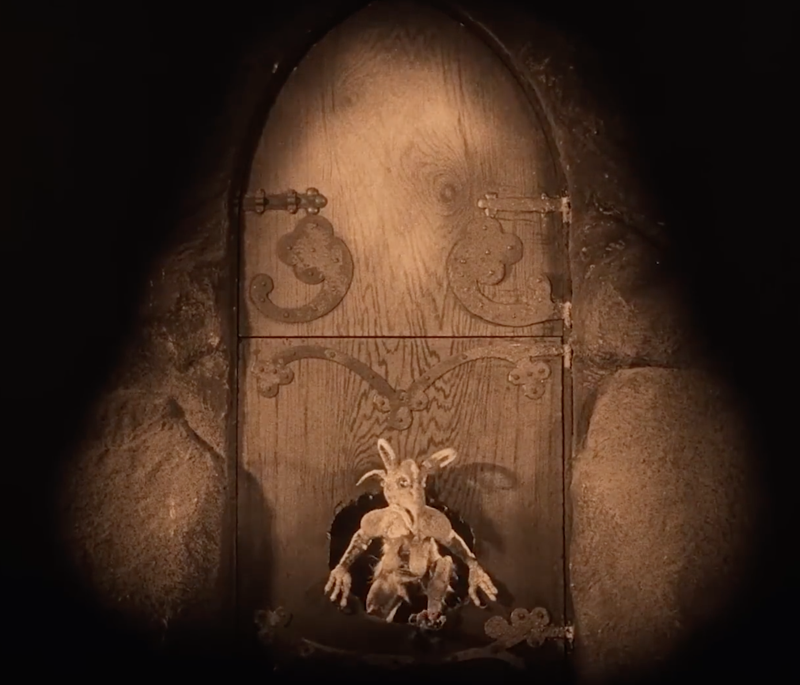 The final section, where it contrasts witch hunt mania to 20th century psychiatric diagnoses of female hysteria, feels startlingly modern, too, after all that’s gone before, and ends the film on a fittingly upsetting note.

1. I watched this on an old Tartan Video DVD.

2. Which contained two versions – the original 1922 version, with Danish intertitles (basically this youtube version that I took the screenshots from), and various different soundtracks (included what supposedly was the original score from its premiere), and a 1968 American re-edited version called Witchcraft Through The Ages, with a William Burroughs narration and a wonderfully demented 60s jazz soundtrack.

3. I hadn’t seen that version before and it was wonderful, especially the nice stark black and white look, which I like a lot more than the red tinting on the majority of the 1922 version.

4. And William Burroughs has the best voice. He really does.

5. Anyway I’d seen this a couple of times before.

6. Once was the original version on Film Four a few years back.

7. And the other time was about ten years ago in a pub in Chelmsford, where a textless edit of the film was being projected onto a sheet while a very loud band played a live soundtrack to it very loudly.

8. Which was wonderful obviously

9. I have no idea who the band were I’m afraid.

Scrooge, Or Marley’s Ghost is the oldest Christmas Carol adaptation on film, ade in 1901 by WR Booth (who directed a few other films I’ve already reviewed here, if you’re interested in). 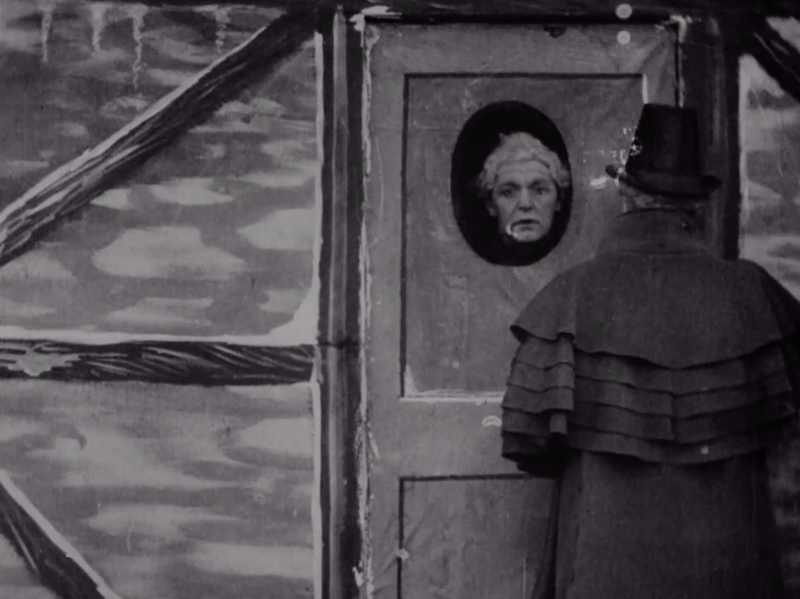 This is a very quick run through of A Christmas Carol, assuming the audience already knows the story, and instead simply condensing the whole thing down into five scenes (although unfortunately the last one seems to have been lost at some point in the century since).

But still, we get the three visions of past, present and future, with some nice early double exposure trick shots to help portray the ghosts, and some good overacting from Scrooge (I especially like his “Look! It’s me!” turn to the camera when he sees the scene from his past). 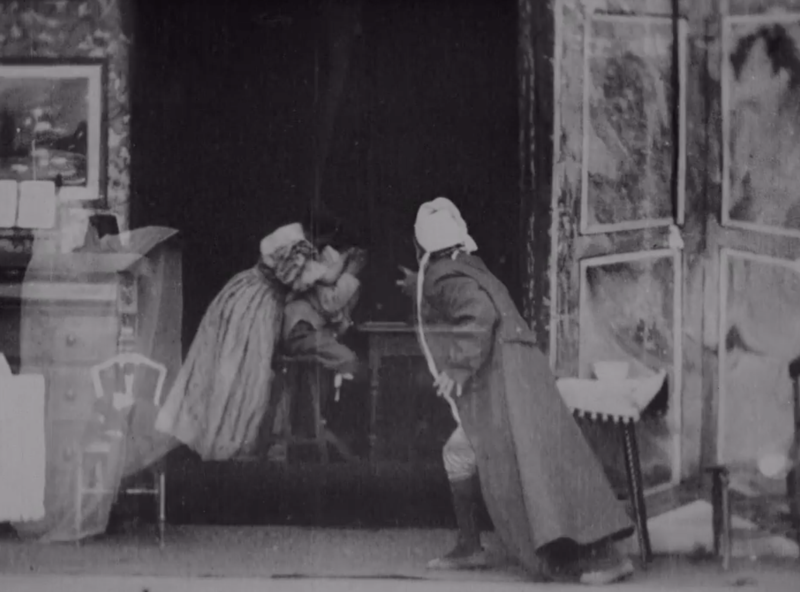 Because it’s so short, this is fairly slight all round, but it’s pretty charming nonetheless, and I like how utterly delighted the children in Bob Cratchit’s scene seem to be. I was also kind of surprised to see the word ‘Xmas’ here, but apparently that’s hundreds of years old and not some relatively modern invention like I’d obviously previously assumed. Maybe X isn’t quite the futuristically cool letter I’d always thought it to be. 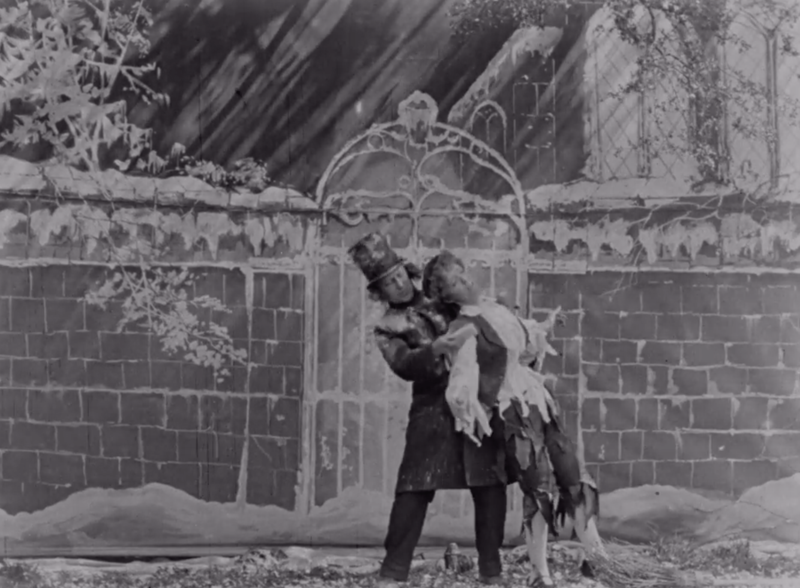 Now, while Scrooge was the oldest Christmas Carol adaptation, the oldest Dickens film is the (very short) Death Of Poor Joe, which was made a year or so earlier, in 1900. A whole minute of ultra misery, this recreates a single scene from Bleak House, and there’s not much to say about it really (I have never read Bleak House, so the full sadness of the situation is lost on me, I’m afraid).

But for completeness’s sake I have included it here.

1. I watched Scrooge, Or Marley’s Ghost on the BFI Player

2. But it’s also on youtube if you can’t see the BFI Player version.

3. Although that version seems to be played at double the speed of the one on the BFI site.

5. Also I watched this while listening to this version of Merry Christmas Mr Lawrence by Ryuichi Sakamoto, which seemed to fit rather nicely.

6. Although it’s such a lovely bit of music it probably fits nicely with everything.

7. Also, I watched The Death Of Poor Joe on the BFI Player too. 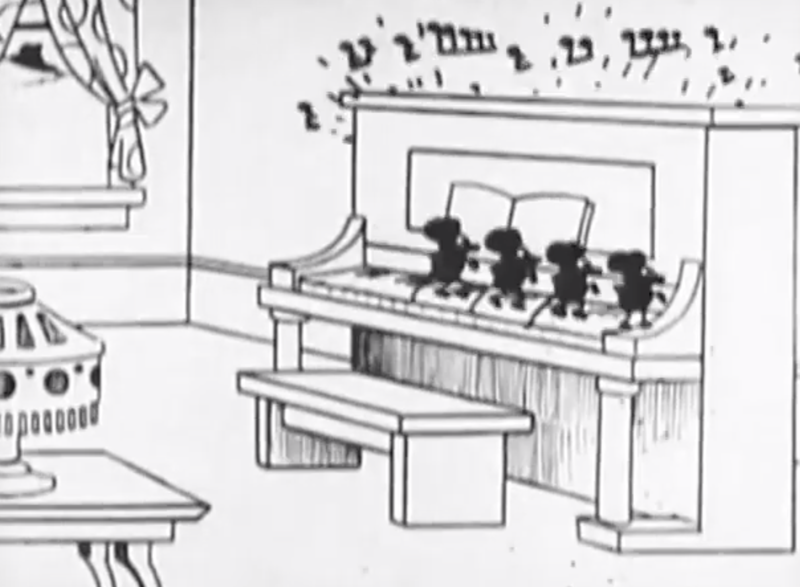 I’ve never quite worked out why Felix The Cat was so wildly popular for so long (it’s not that he’s necessarily bad, it’s just that he’s not that good), and Felix In The Swim (one of 17 Felix The Cat cartoons released in 1922 alone) doesn’t really do much to illuminate things, with some pretty charmless visuals, inert jokes and consistently bad comic timing (although the mice playing the piano are lovely).

Felix Comes Back, though, from later in the year, is much better, with better animation, funnier jokes, some inventive mild surrealism, and a penguin in the Arctic (where all the best cartoon penguins live). 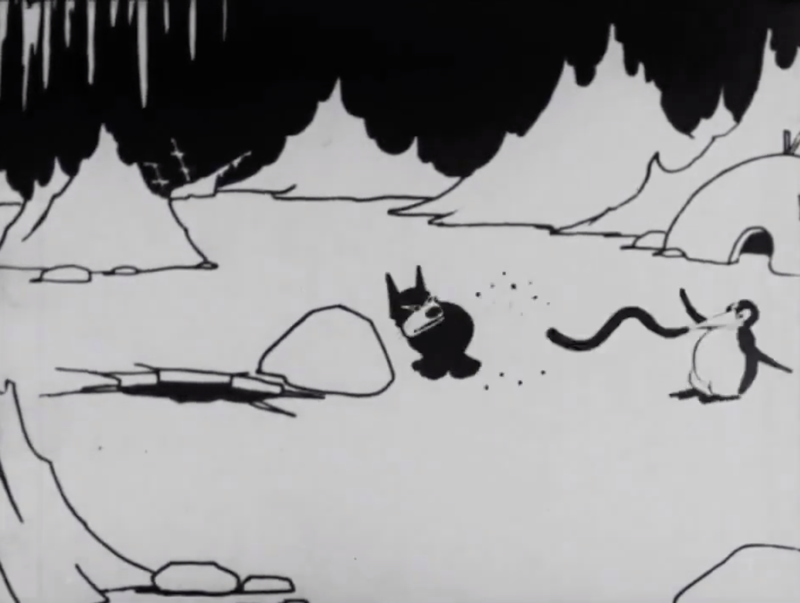 So, if you’re going to watch one hundred year old Felix The Cat cartoon today, make it that one. Or maybe one of the other fifteen, who knows.

1. I watched both of these on youtube. Felix In The Swim has added sound effects and music, which don’t actually add that much, while Felix Comex Back is nice and silent, just as nature intended.

2. I previously reviewed a couple of earlier Felix The Cat cartoons on here: Feline Follies (1919) and Frolics At The Circus (1920).

3. Oddly, the title of Felix Comes Back spoils the final joke (when Felix does indeed come back).

4. But maybe they were worried you’d think he was trapped in the Arctic forever otherwise.

5. And didn’t want anyone to become upset.

The Cameraman’s Revenge is a Russian animation from 1912, directed by Ladislas Starevich, in which he uses stop motion animated dead insects to tell a slightly baffling tale of infidelity, voyeurism and revenge, for some reason. 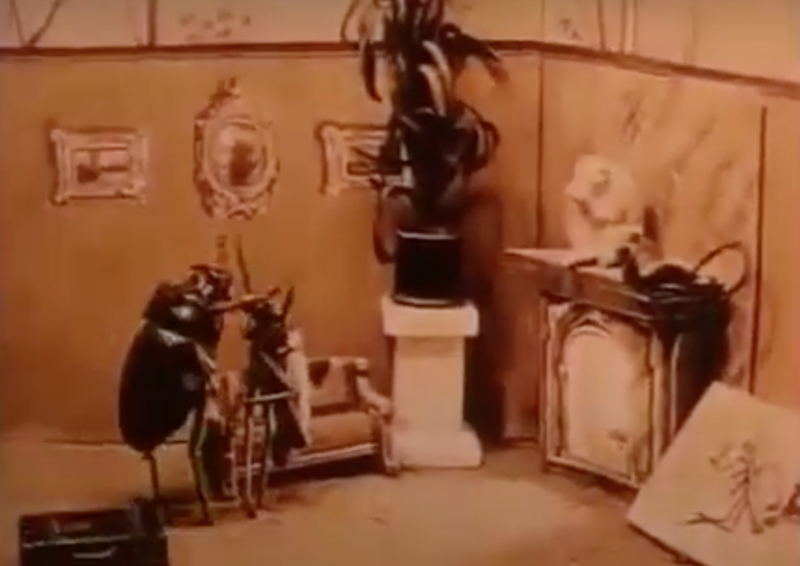 Two beetles in a loveless marriage run off whenever they can to have affairs, one with an artist (another beetle), the other with a showgirl (a dragonfly), while the projectionist at the local cinema (he’s a grasshopper, I think) uses his camera to film the showgirl’s affair through the keyhole in the hotel door.

Then there’s just about enough time for some fist fights and confrontations and other odd convolutions of plot before we reach the end. 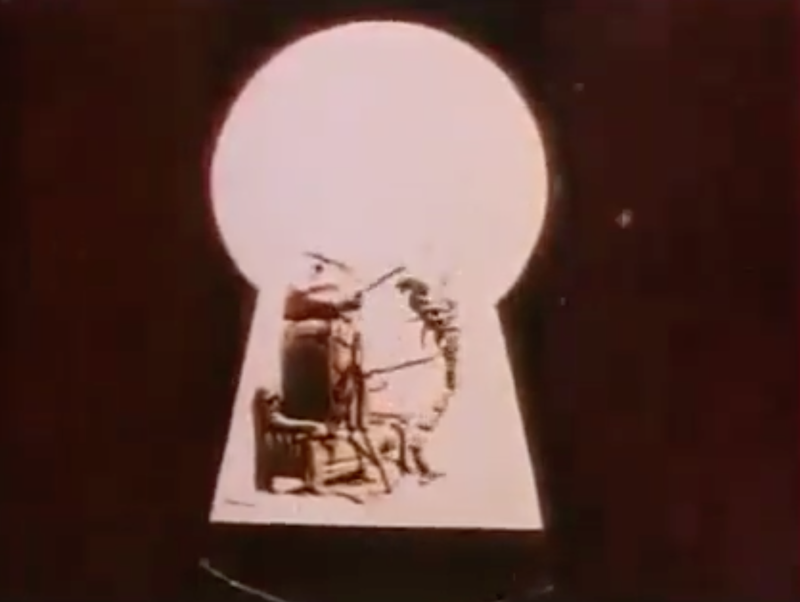 Anyway, and unsurprisingly, I liked this a lot. The animation’s great (although the picture quality is terrible, so obscures a lot of it), there’s some wonderful touches (especially when everyone goes to the cinema and their watching the scenes we’ve already seen projected onto their little cinema screen), and it’s surprisingly prescient in it’s prediction of mobile phone and hidden camera voyeurism, although the idea that the local cinema would be where you showed all this rather than on the grottier corners of the internet is quite wide of the mark.

3. And hopefully better quality ones somewhere (although I didn’t find any).

4. This is one of the problems of watching old films on the internet, all the general degradations of film over time combined with video conversion fuzziness and youtube compression artefacts until everything’s a complete visual mess.

5. Which is a shame, because I expect this looked incredible at the time.