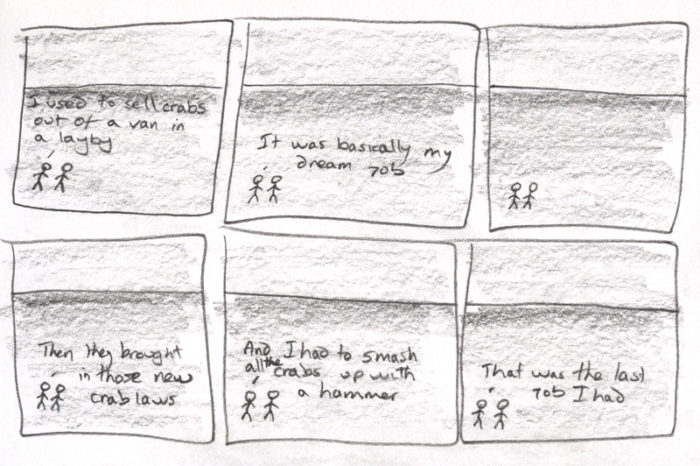 [This is a collection of articles and other media concerning, sometimes obliquely, the compelling Crabbus Man myth of Maldon, Essex. What the truth behind the legend truly is has never been ascertained]

‘As any fool know, to walk after dark through Promenade Park is to walk in the shadow of death; for there the Crabbus Man lurks and scuttles, with his clacking claws and twitching eye stalks, ready to leap upon the unwary and clack at them, they whose souls shall know no peace for all their remaining days upon the Earth…’ Or so wrote the Reverend Joseph Arkwright in his diary for the year 1863. Arkwright never saw the creature himself, though his borderline obsessive documentation of the Crabbus Man, including many incidents of its manifestations as sundry simulacra throughout Maldon (be it a cloud that ‘rather resembled a crab’s claw’ or a shadow upon a grass verge that ‘seemed to scuttle most unwholesomely’) has become the go-to source for Crabbus lore.

The Ballad Of The Crabbus Man, by Thomas Morton

The Persistent Myths Of Maldon

The cultural worth of a town can perhaps be measured in its myths. As part of my research into the viability of Essex towns in this new millenium, I came across the following three tales repeatedly, uttered with barely any change through over a thousand years of paperwork and quilting.

The Crabbus Man was a child born with crab claws for hands and taken by the sickened residents to the river to be drowned. While the mayor was holding the child underwater it is said that he slipped from his grasp and fell to the bed of the river, but no amount of searching could yield a corpse. The whispered implication at the end of the tale being that he escaped down through the mud into the crab caverns below, where even to this day he weeps and plans and one day will have his revenge. To this day, crabs are caught and smashed to pieces by the townsfolk in the hope of catching and destroying him before he can return.

The Crow Child was a child born with the blackened skin of a crow. Thought to be a golem crafted from the muds of the marsh, he was hauled up into a tree and placed in the nest of a rook. It is said that eventually he flew away to the moon, and to this day the people of the town are afraid of crows and the moon.

Susan Swan-Neck was a child born with an exceptionally long neck, thought by the residents of the town to be the reincarnation of King Harold II’s wife Edith Swan-Neck. Still believing that Harold’s descendants were the rightful heirs to the throne, Susan was quickly made Ealdorman of Maldon. When next spring she laid several eggs of her own it was clearly revealed that she was an actual swan, and her and her adoptive mother were driven from the town by an angry mob. Their ultimate fate is unknown, but to this day swans are not allowed into the town hall while council meetings are in progress.

As can be seen above, there is a strange monotony to their legends which matches the drab uniformity of the town. It is with little regret that I announce here that the entire Maldon district is to be abandoned to the sea.

The Crabbus Man Of Promenade Park has long been one of Essex’s most fearsome foes. Although no direct sightings of the Crabbus Man have ever been verified, he is known to be more than mere myth by careful observation of the aftermath of his actions. Periodic crab massacres litter the history of Maldon (but never Heybridge, almost as if the beast is afraid to cross the river and risk the wrath of the subhuman inhabitants of the northern bank); frequently the town wakes up to find the trundleways and amblepaths of the town are covered in trails of fresh gore dripped straight from his ever-bleeding claws; signs warning visitors to beware of the mud being gnawed upon with frightening regularity; all of these and more are all the proofs we have or need. 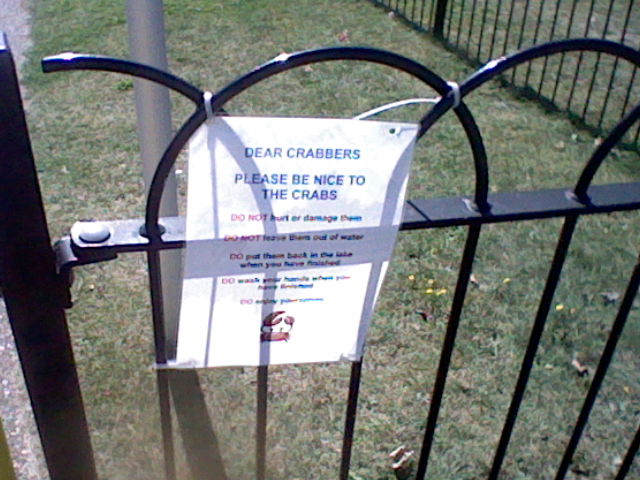 The atrocities and activities of the Crabbus Man ebb and flow, sometimes fading almost out of memory before coming crashing back into our reality in a storm of shattered shells and a puddle of rotting crab flesh festering in the sun. Residents have described the events of this summer as “intolerable”, with a new outrage at least once a week. Concerned locals, after a series of hastily arranged town meetings where they dicsussed ideas for combatting this menace, have now begun to post a series of notices across the town, beseeching the returned Crabbus Man to curb his rampages and display at least a modicum of respect and civilised behaviour.

The notices, written in the terse and economical Essex way –

[an historical aside: in 1990, Essex County Council, having been impressed with Microsoft’s fledgling Powerpoint software, and realising the superiority of its methods of communications, banned the use of paragraphs and words of more than two syllables in all internally produced memos, notices, signs, posters, leaflets and other forms of written communications, eliminating the wasteful use of language and distilling everything down to the most salient points. This lead to clearer communications facilitating an increase in decision-making time savings of over 95 man hours per person per year, as well as the reduction of ambiguity-based misapprehensions and confusions by over 40%, and 75% lower paper purchasing costs.]

– have been tied to several railings that mark the boundary between the town park and the hallowed crablands of the Blackwater. The notices, addressed directly to the Crabbus Man himself, read:

PLEASE BE NICE TO CRABS

DO NOT hurt or damage them

DO NOT leave them out of water

DO put them back in the lake when you have finished

DO wash your hands when you have finished

Although the Crabbus Man’s name has been mangled by the rigorous adherence to the council computer’s spellchecking device’s suggestions, scholars think that this notices clear instructions to the man could appeal to the creature’s better nature and help work in pacifying the beast, although it is possible that his dual nature as part man and part shambling horror (alluded to in the “enjoy yourselves” directive) could be beyond rational control. At this stage, however, it is our only hope. 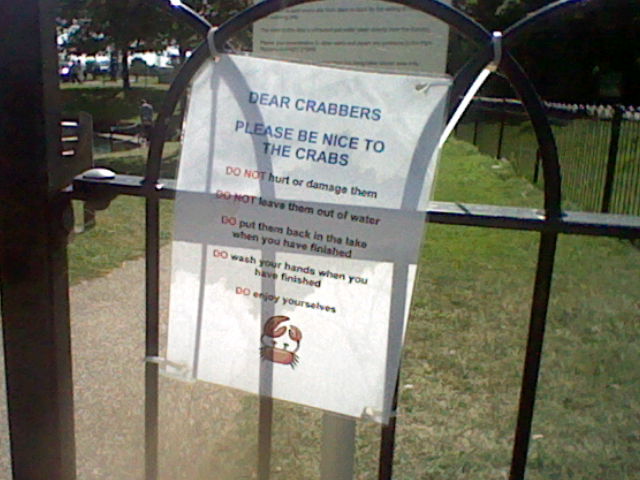 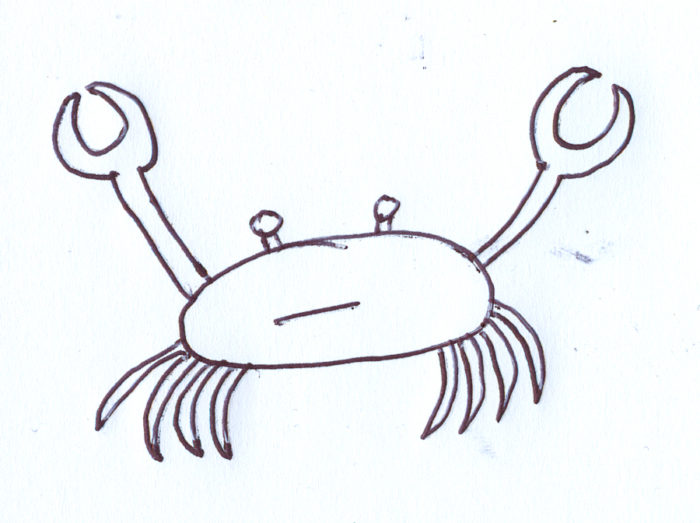 Residents in the Essex marshlands were shocked by the discovery of a huge crab said to be the largest ever seen by crabbers in Maldon this week. The terrifying beast (an artist’s impression of which can be seen above) was found scuttling around near a child’s bucket by the ruins of the town’s hythe, which tragically collapsed earlier this year in an unrelated incident which caused the death of 72 tourists.

“It’s utterly terrifying,” said unemployed localson David N. Guy (no relation to the reporter). “No doubt it has been feeding on the bodies down there, growing fat on their unfathomable flesh. I said at the time that we should send them back to wherever it was they came from, but did the council listen? No. They didn’t listen to me at all. They never do. Perhaps when it’s one of their children’s fingers getting savagely nipped they’ll finally start paying attention. But by then it’ll be too late.”

Councilw’mn Eliza Dredgeland dismissed this as ridiculous scaremongering from an ignorant oaf. “As readers of your site will no doubt know [cf. The Ballad Of Shitpant N. Guy], this man is a shambolic mess who can’t even control his own gastric functions, so it is no surprise that he has no understanding of this complex situation whatsoever. It would be a gross dereliction of our duties to the council tax payers of this district to allow the financial burden of the removal of these corpses to be placed solely on their shoulders, when it wasn’t any of them who died. Is it too much to ask that those coming from outside pay their own way rather than expecting others to pay for the consequences of their frivolous gallivanting?

“Coupled with this, the idea that the crab could grow to monstrous size on a diet of human flesh is a simplistic and naive one, with no basis in the physical laws that underpin our universe or any of the known processes of accepted biology. Furthermore, I would question whether this crab really is the biggest ever. Our records only go back to 1604, so who’s to say what size crabs you had back then. 400 years may seem a long time to us, but it is utterly insignificant when you think of the 700 million year reign of crabkind. Crabs of this size might be a perfectly natural part of the crab lifecycle, and therefore nothing to do with these corpses in the river.”

The previous largest crab, dubbed Great Big Barry by locals, measured 5 inches from claw to claw when splayed out like a paper angel. Discovered on June 16th, 1978, postcards of Great Big Barry laid out before his captors still do a brisk trade, selling for upwards of 30p at local kiosks. And some people hope that this new find – or fiend, as the Mayor has claimed – will bring much needed economic growth to the town.

The Crab – as it has so far been called by the shocked populace, the “The” said in an exaggerated fashion that suggests a mix of reverential awe, horror, incredulity, terror and even arousal – has not yet been accurately measured, although eyewitness accounts state that it was at least as wide as a pretty wide shoe. Indeed, official measurements may never be known, since under Dengie law the crab has been quarantined at the customs hut since discovery, and if tests indicate even a hint of rabies then it must be incinerated immediately from afar, untouched and alone.

The Crabbus Man (a children’s book) 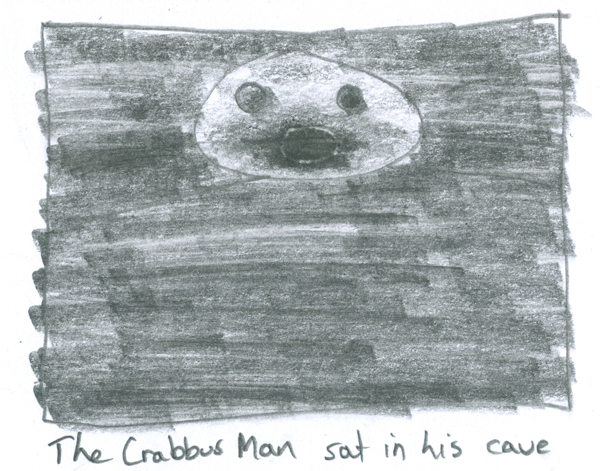 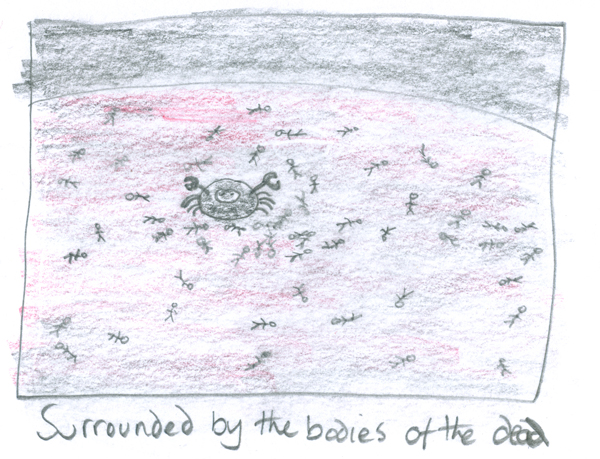 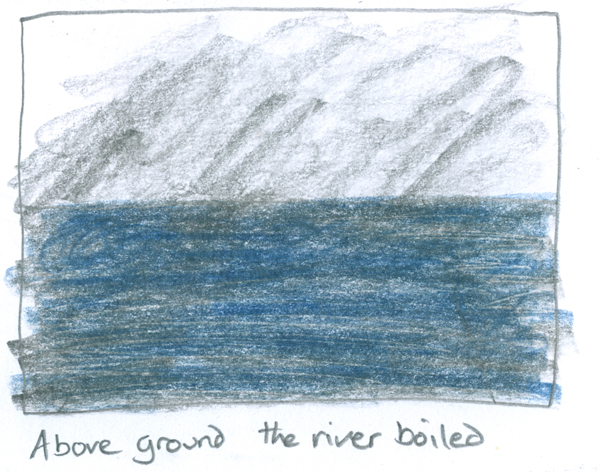 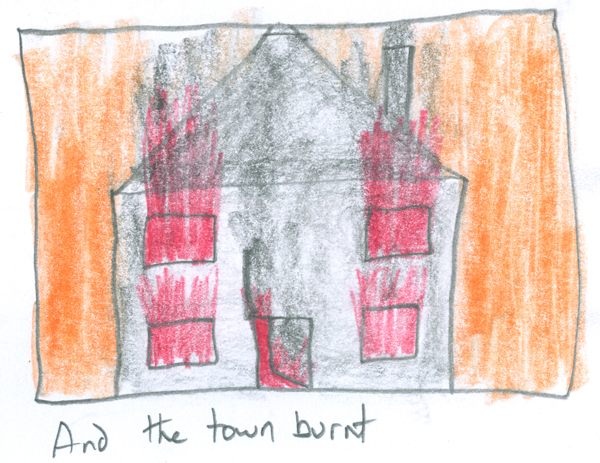 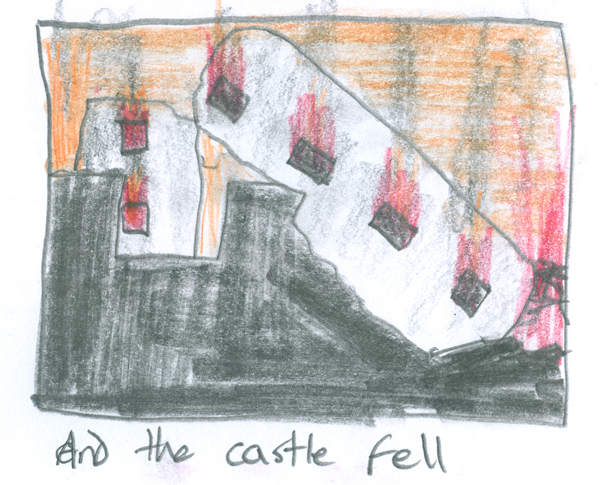 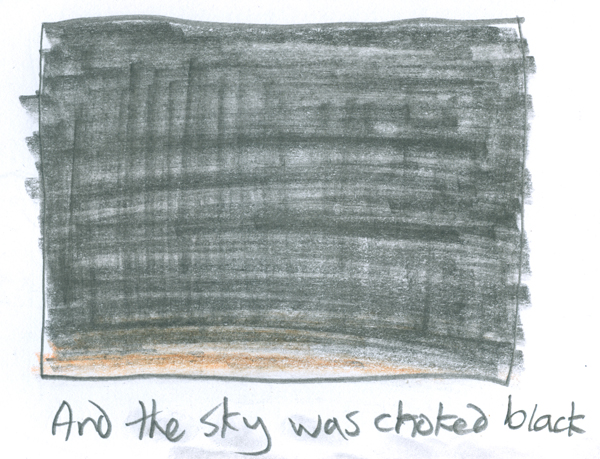 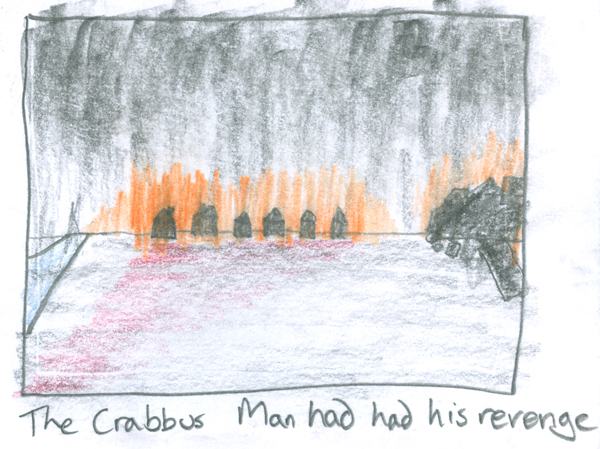 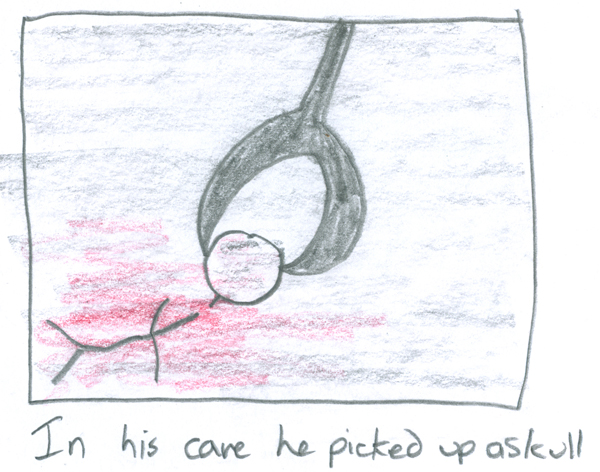 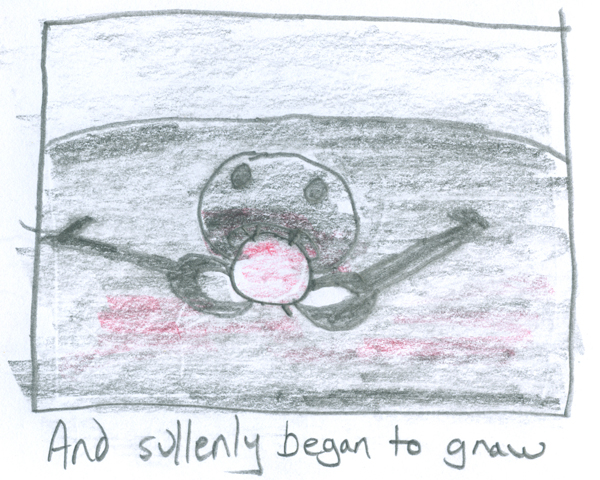 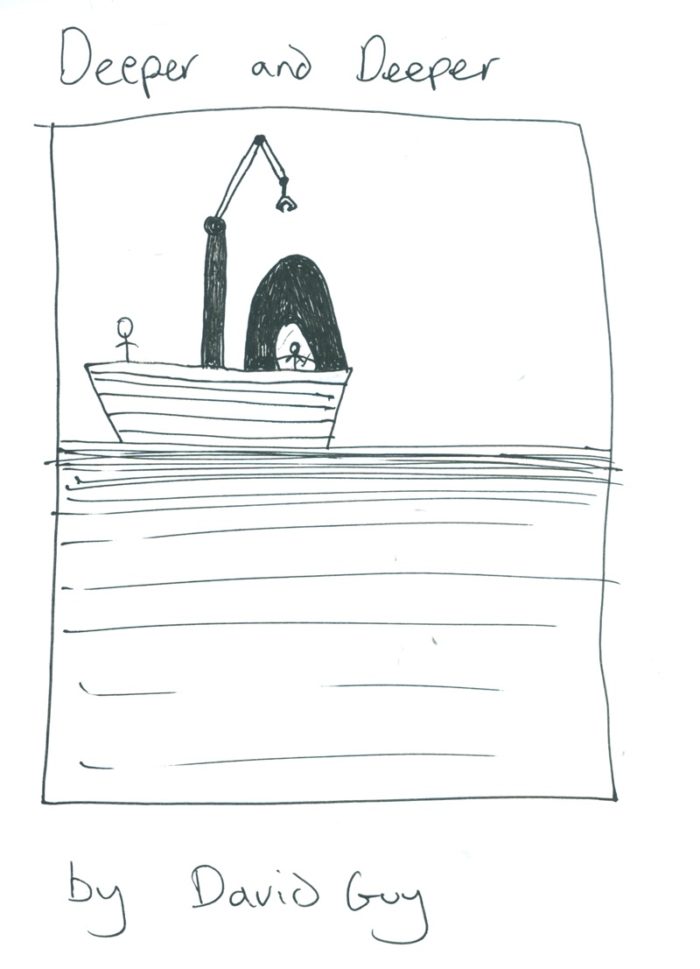 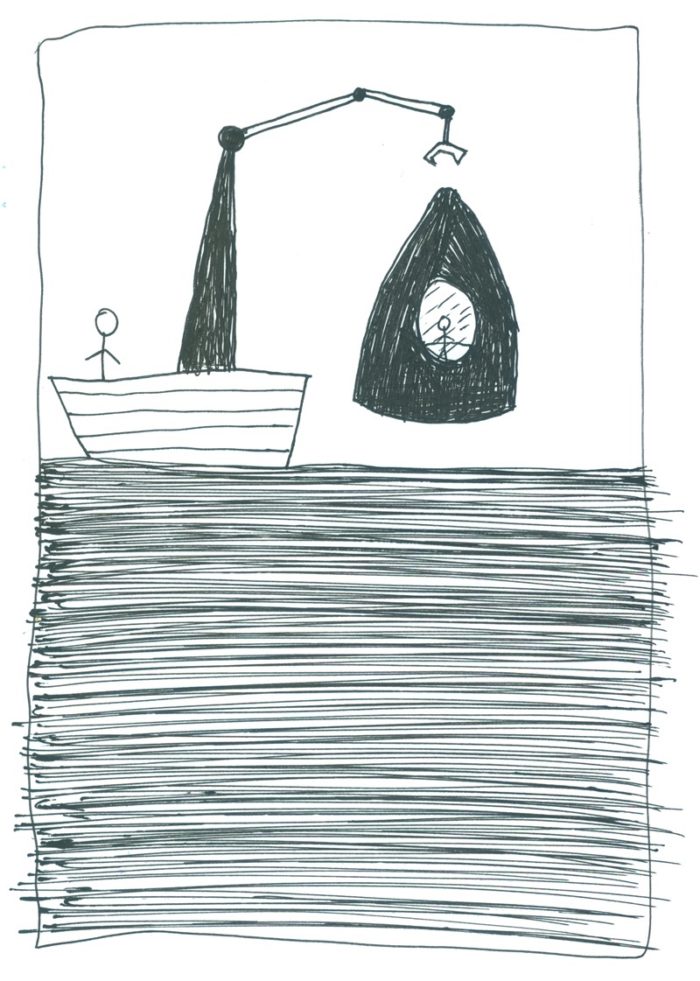 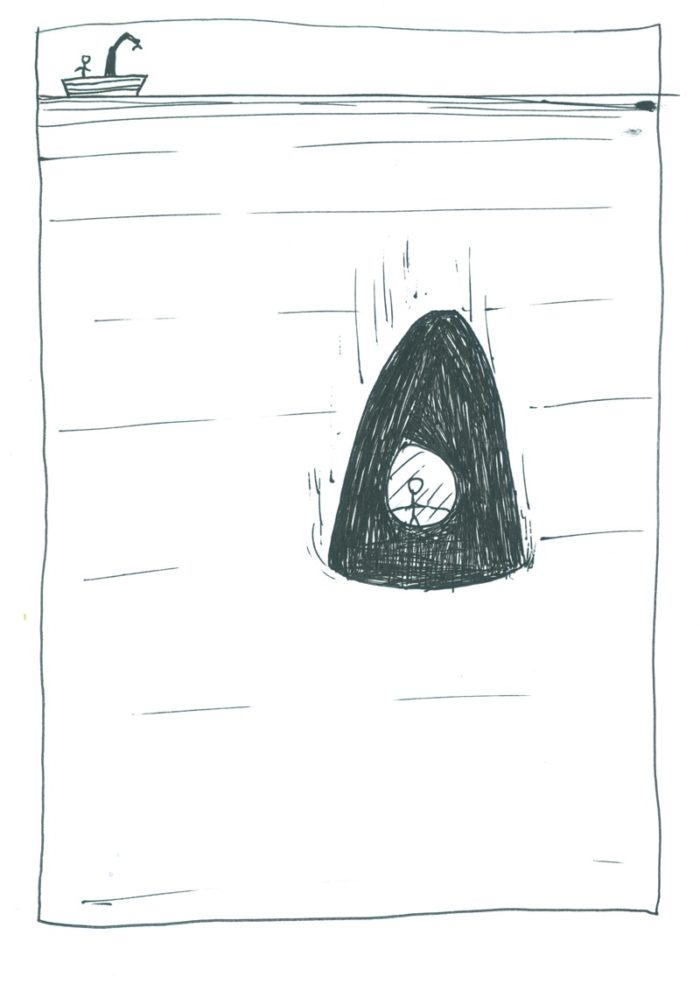 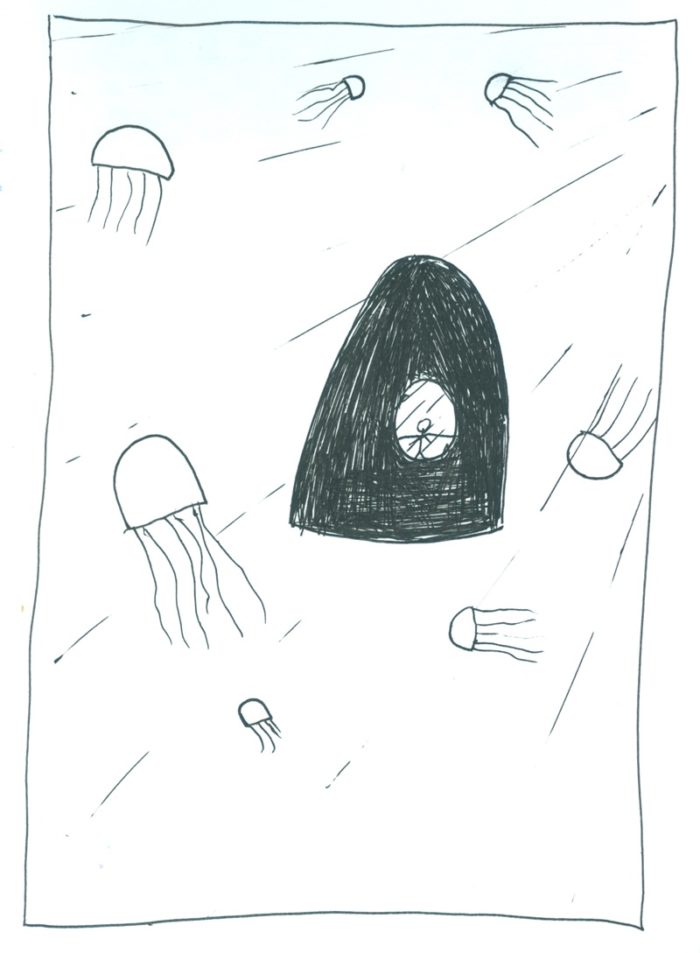 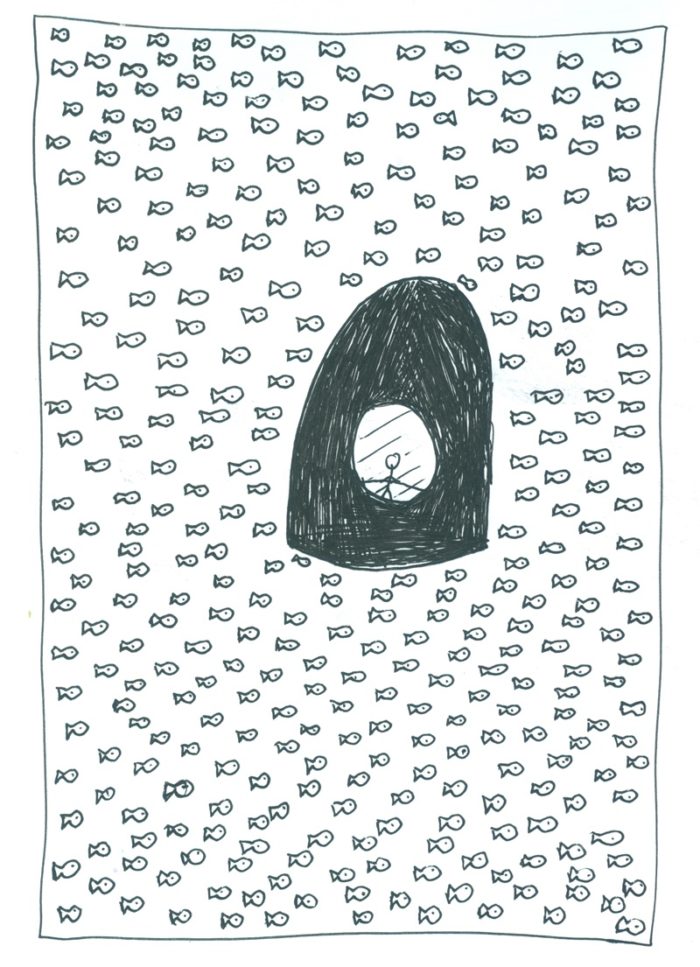 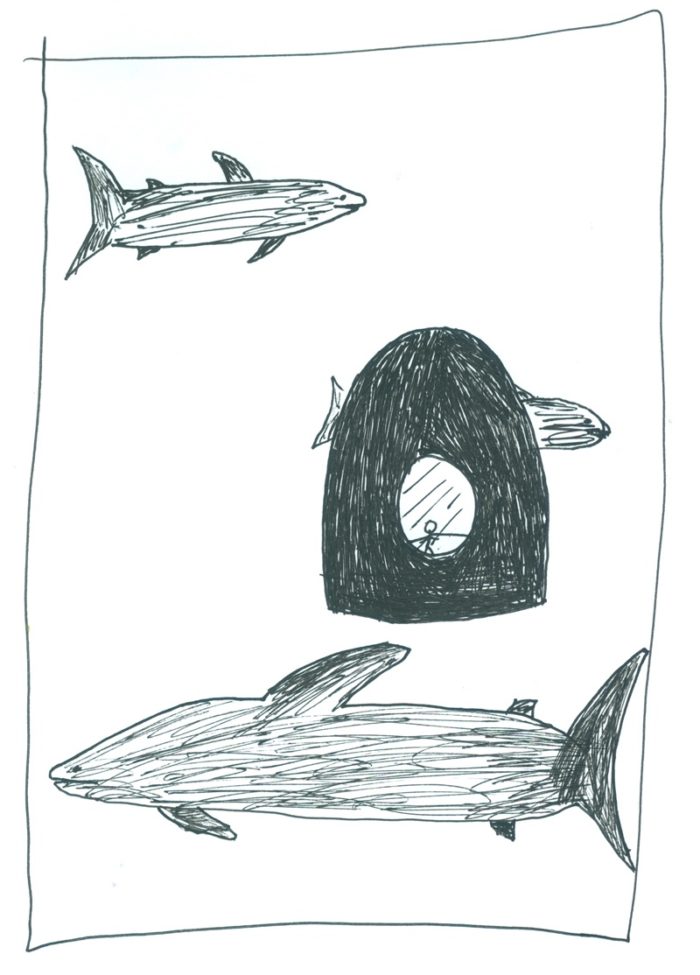 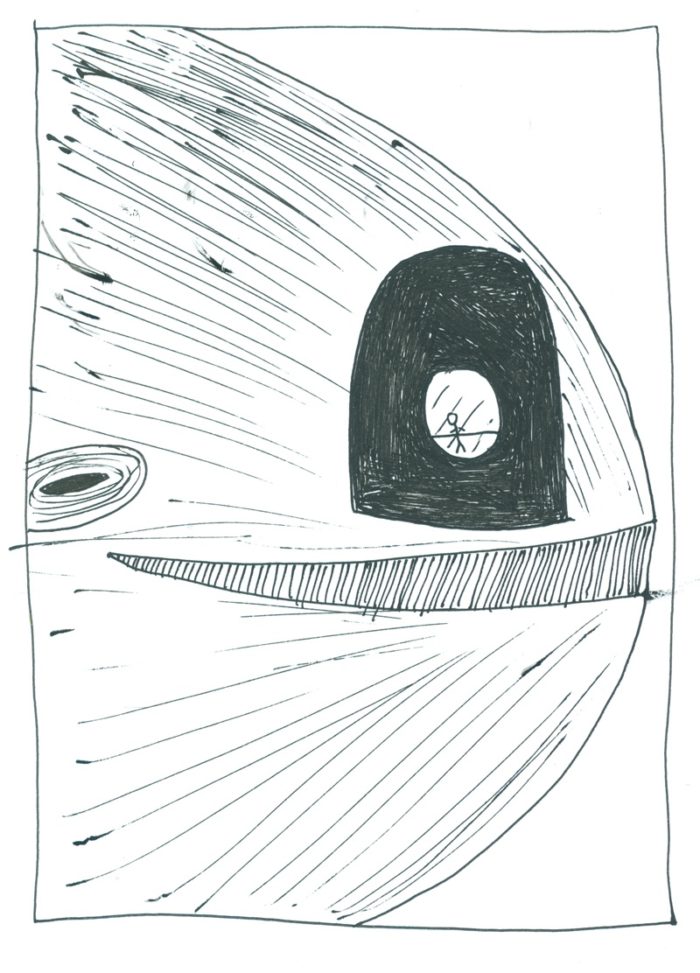 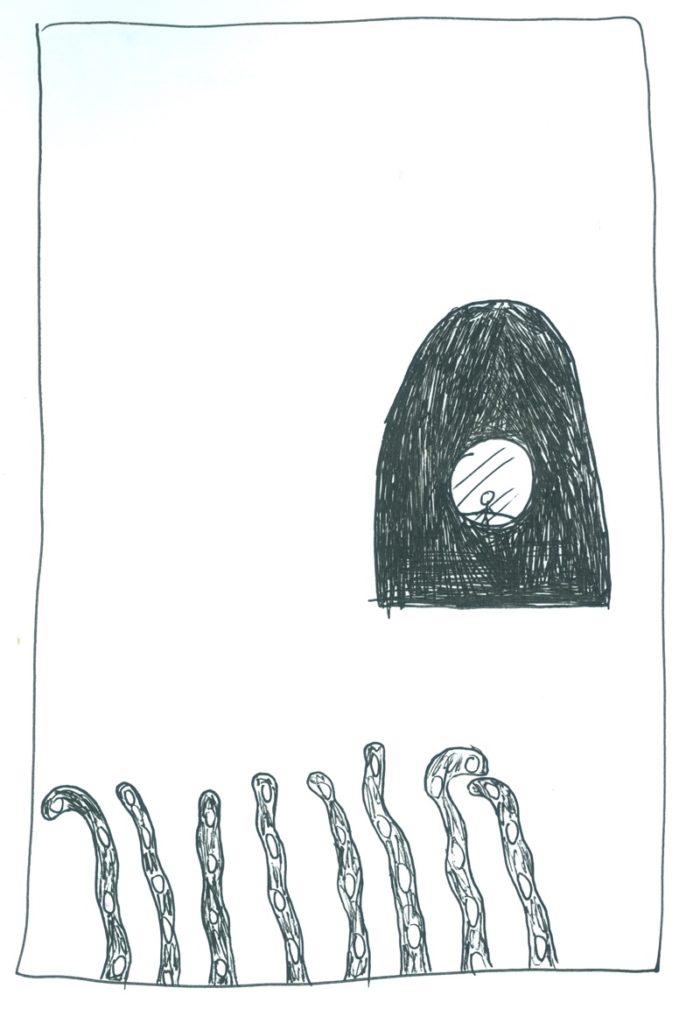 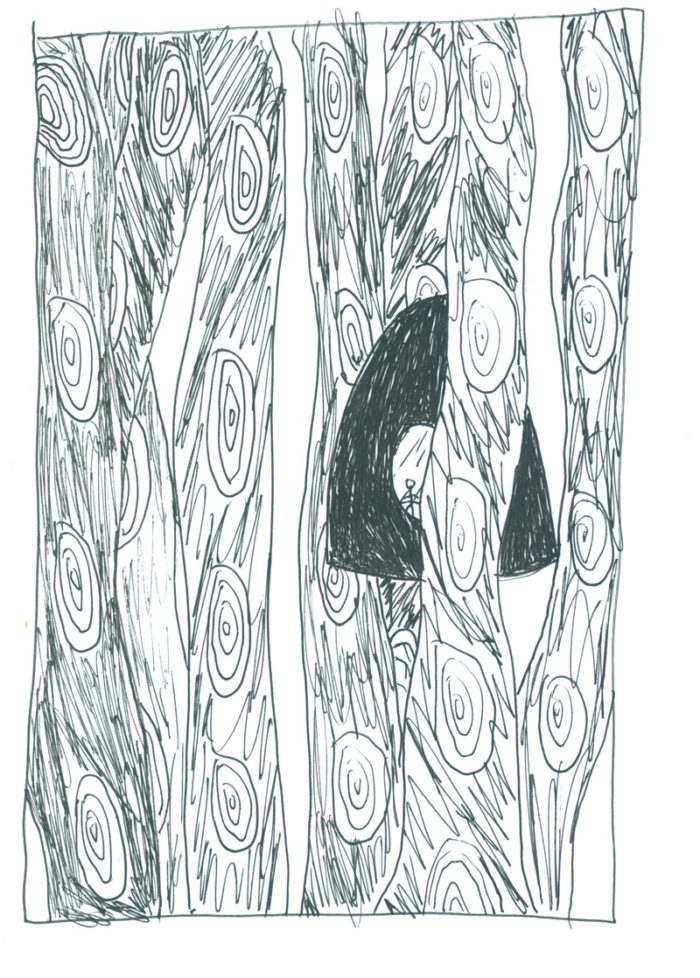 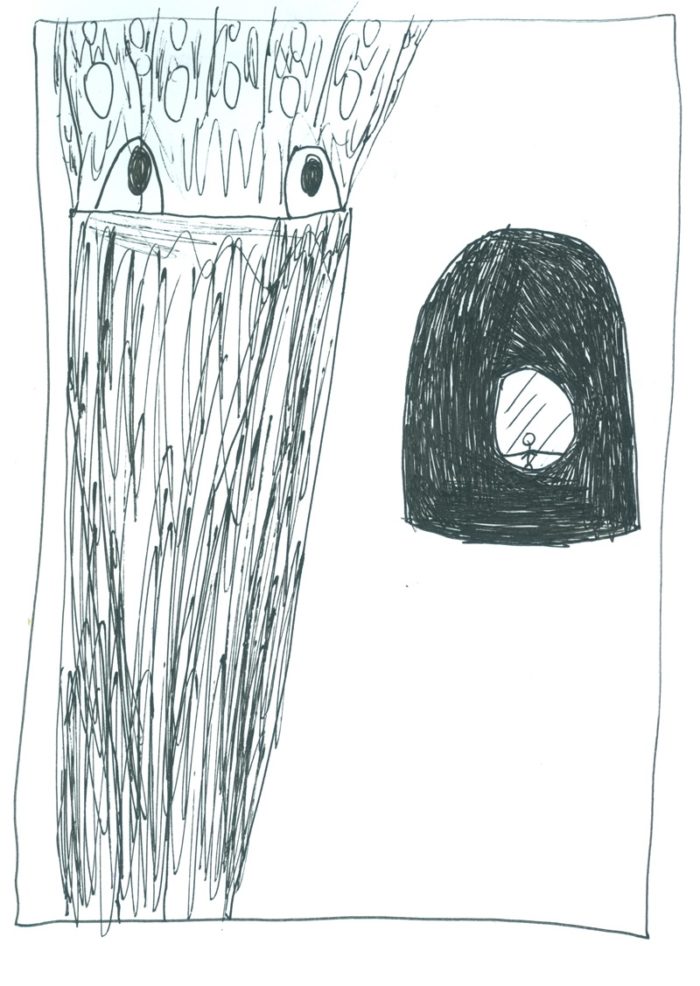 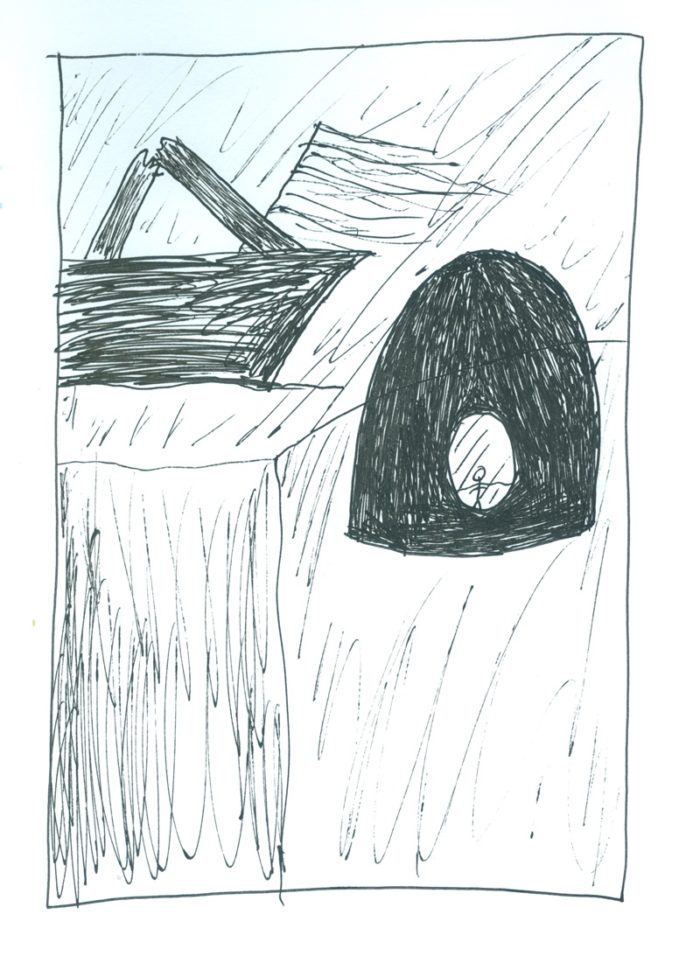 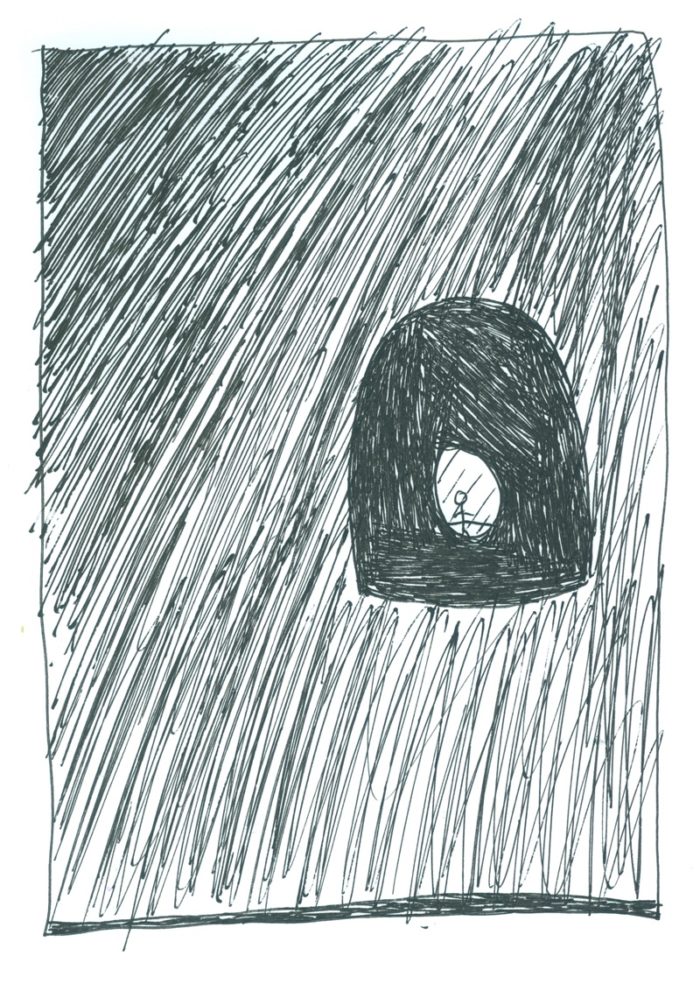 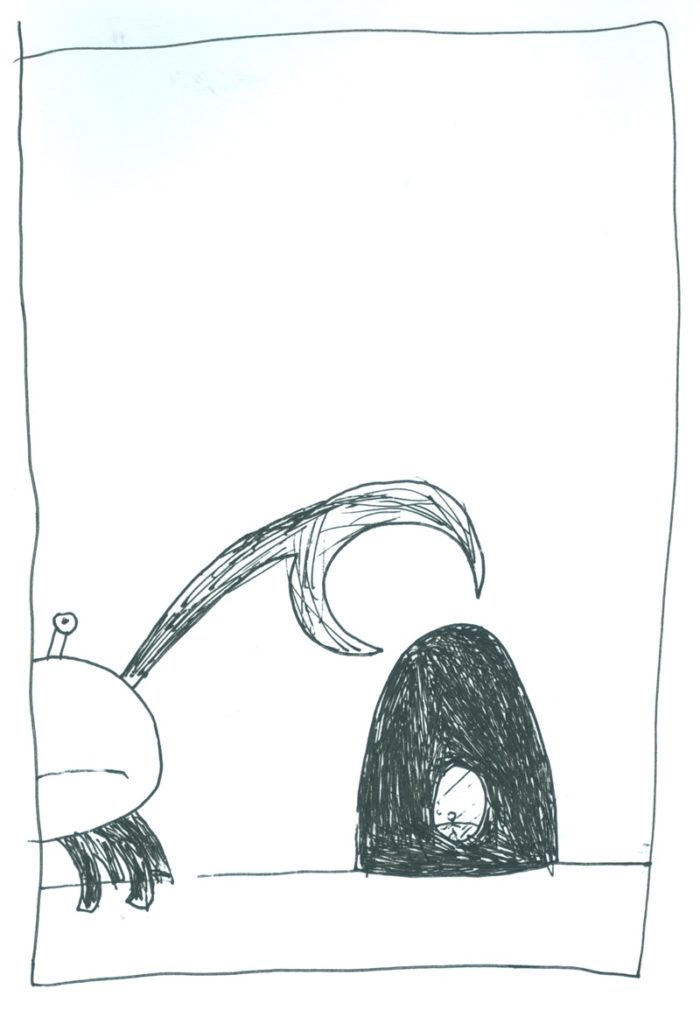 1. This was written and drawn on 3rd of November, 2014
2. After listening to Bathysphere by Smog
3. Or maybe the Cat Power version
4. I can’t remember now
5. Also this is supposed to be a “vertical” book
6. With the spine along the tops and bottoms of the page, rather than at the sides

The boat cost five pounds, for an hour. Oars cost £1 (per pair), or you could hire a pole for 50p. Engines were not available.

At the end of the hour, if unreturned to the point of hire, the boat sank to the bottom of the lake and scuttled back home, using the oars and the poles like crab’s legs.

The passengers bobbed up and down in their life jackets, awaiting rescue, recriminations rippling through the group like involuntary shivers.