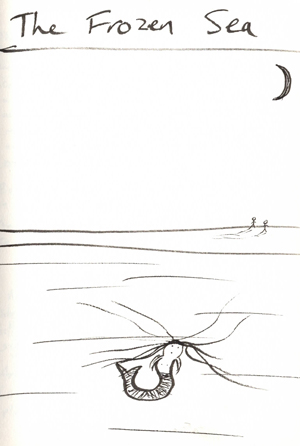 Above The Frozen Sea

The sea was frozen from the shore to somewhere beyond the horizon, as far out as anyone dared to tread. The whole town came out to see. It was like a dream. In years to come no one would be believed when they spoke of it.

Some walked timidly on the ice, some ran, slid, spun, others still skated up and down, around and around, pirouettes and arabesques, smiles to the crowd, kisses, applause.

Behind a wave of ice, out beyond the headland, in a world entirely of their own, Oya and Anna slid into each others arms. Nothing could keep them apart.

The Frozen Sea Itself

Not flat like a frozen lake, but undulating, like the gently rolling curves of some furrowed hillside. The ice groans and creaks, moans and sighs. But it does not move.

The philosophers amongst us wonder, Is a wave still a wave when it’s been frozen in place?

Below The Frozen Sea

For a mermaid there is no loneliness like days spent swimming beneath frozen seas. The footsteps above sound like explosions from some distant war, the scrape of skates against ice like tortured screams.

The sea itself seems smaller, darker, the sky now a roof, the sun as dull as the moon, her home reduced from its limitless splendour to this dismal claustrophobic cave.

The mermaid sings and sings, weeps and wails, but no one can hear. On days like today, not even the gulls return her calls. 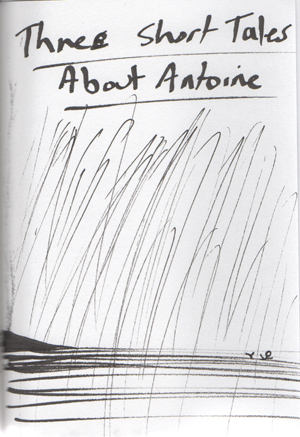 Agnes sat on the rock and looked out to sea. Behind her, in the shadows of the cave, a slightly darker shadow lurked.

She took a sandwich from her bag and had a bite.

“I brought you some lunch.” She held out the bag of sandwiches behind her, and almost instantly it was snatched from hr hand. “And we’re worried about you, Antoine. This cave can’t be good for you.”

“What’s wrong with my cave? I love this cave. It’s exactly what I need right now. It’s perfect.”

“Well,” Agnes said carefully. “Maybe so. But it’s damp. And the smoke from your fire just lingers everywhere. It’s a health hazard.”

“And there’s the crabs, Antoine.” Agnes looked down at the little crowd of them on the sand, as they raised their little claws up at her defiantly. “I don’t know how you put up with them.”

“They’re not as aggressive as they look,” Antoine said. “Well, they are, but, you know, you just need to give them space.”

“We still don’t think you should live in the cave.”

“So can I come back to the house?”

“Well, where else am I going to live?”

“I don’t know. But there must be somewhere nicer than this?”

“Who said anything about the well?”

Agnes waited, but there was no reply. When she finished her sandwich, she jumped down from the rock and started back across the beach.

“Do they miss me?” a distant voice said.

“Of course they miss you,” Agnes said, unconvincingly. “They miss you terribly.”

Antoine spent his evening how he spent every evening and would spend every evening for quite some time. He sat beside the fire in his cave and thought about all the conversations he had ever had.

He was going through them in order, and was currently trapped somewhere in his teenage years. Once again it seemed like they would never end.

It would have been simple enough if he was content with simply reliving them, but instead he tried to correct them as he went, so that this time through they didn’t spiral out of control and make him look a fool in front of everybody all over again.

The trouble was that even now, as he carefully reworked them so that he had a ready made answer for everything, he still ended up losing the argument. He didn’t know how, but he did.

And not just once, but thousand times, in a million different ways, until each individual conversation from the past became a fractal filled with an infinite variety of easily rebutted idiocy and absurdly pompous ignorance.

Even his own mind was against him.

A Dream Of Mermaids

I was the middle of the night. In the dark, Antoine thought of the mermaid. She swam and swam in the silence of his dreams.

At least his mind never made him argue with her. No matter what he said, she just nodded in agreement, and occasionally splashed the water with her tail. That meant she was particularly amused by whatever it was he had told her. He told her a lot.

She was perfect, he thought. She didn’t even have a voice to answer him back with.

“I do,” the mermaid said, as she popped her head above the waves of his imaginary sea.

“You don’t,” Antoine told her.

“Of course I do,” she said. “How else would I lure anyone into the sea?”

He blushed. Why would she need words for that?

“Not that I’d want to lure you down here, Antoine,” the mermaid said, before disappearing beneath the waves with a defiant splash of her tail.

Antoine lay back in the sand and sighed. The wind moaned through the cave like the lament of some lost and distant whale. The crabs tugged at his sheet, but he would not relax his grip.

1. Written on April 29th, 2021
2. Please see the cast of characters for more information about the protagonists

The wind blew through the town and across the beach with such ferocity that where it met the sea the waves broke backwards, the spume sparkling in the air as it flew out towards wherever it was the waves themselves were born.

Whenever we left the safety of our houses we chained ourselves to the railings, so even when the wind blew us off our feet we would not be blown out to sea with the spume, would not be sucked beneath the waves, down into the depths, down there, where the mermaids that birthed us still circled and swam, still sighed, still sang.

I don’t know what’s wrong with him. I really don’t.

Every night he comes out here on his little boat and sits under the stars and I’ve tried everything but nothing will work.

I’ve sung my heart out for him, I’ve whispered his name on the breeze, I’ve swum seductive circles round his ship. Quick coquettish flashes of bare skin between the waves, playful splashes with my hands, with my tail, even with my whole body on occasion, leaping high overhead, spiralling in a perfect arc above his boat, rolling and turning and winking as I go, like some desperate theme park whale performing for her lunch, before finally landing in a theatrically lavish way, a plume of water rising up after me in the shape of a heart, perhaps, or replicating my arc in reverse like a rainbow, the edges of it raining down in a fine mist on his upturned face like a caress.

None of it works.

He looks so lonely, too. That’s the funny thing. Usually the lonely ones are the easiest. But not this one. I’ve never known anyone this difficult to seduce.

I fear I’m going to have to resort to brute force soon, smash his ship against the rocks and pull him down to the depths in all the commotion and the carnage of the waves I’ve raised against him. But oh god, the embarrassment of it all, to resort to such crass tactics. The shame.

I’ll never live it down.