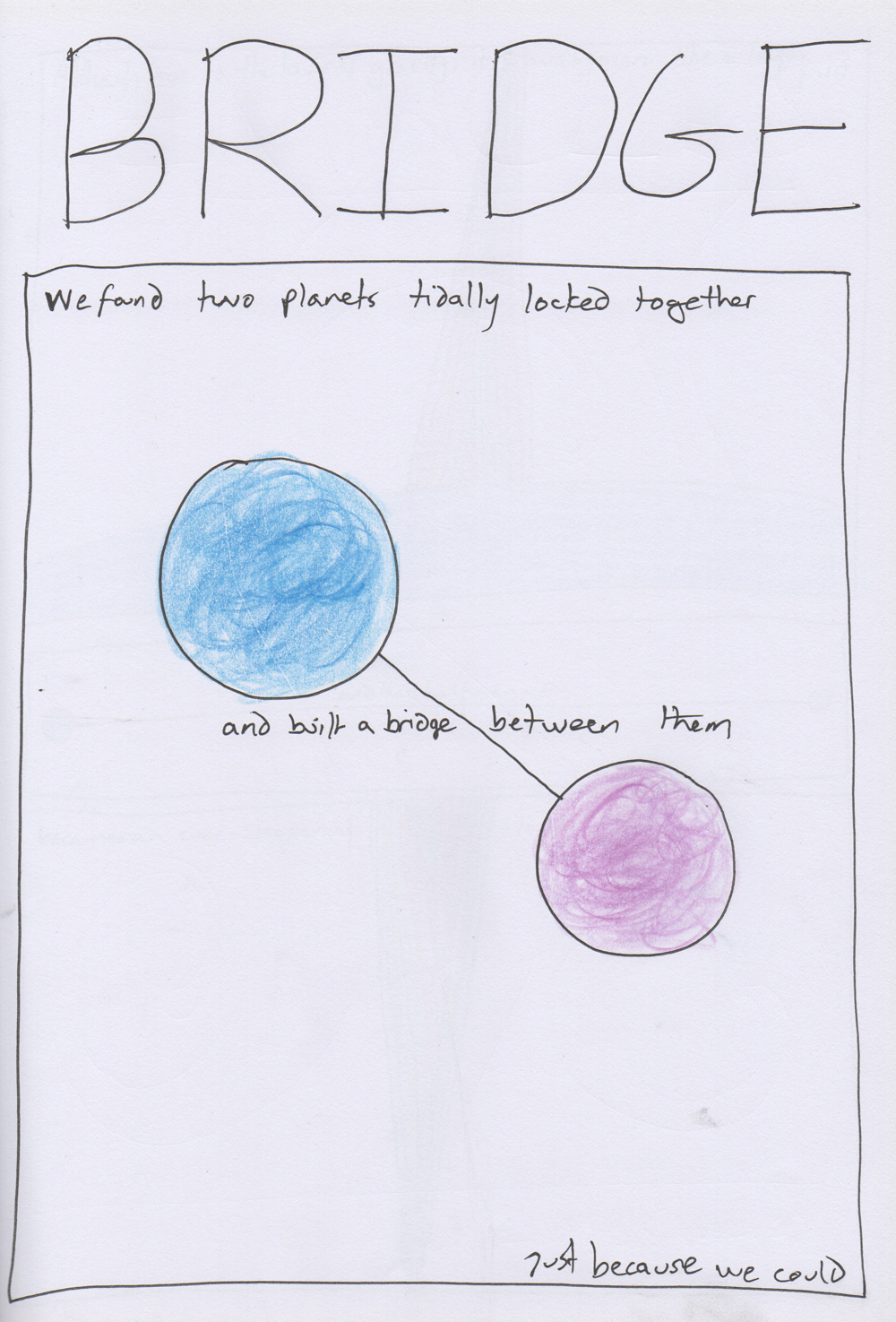 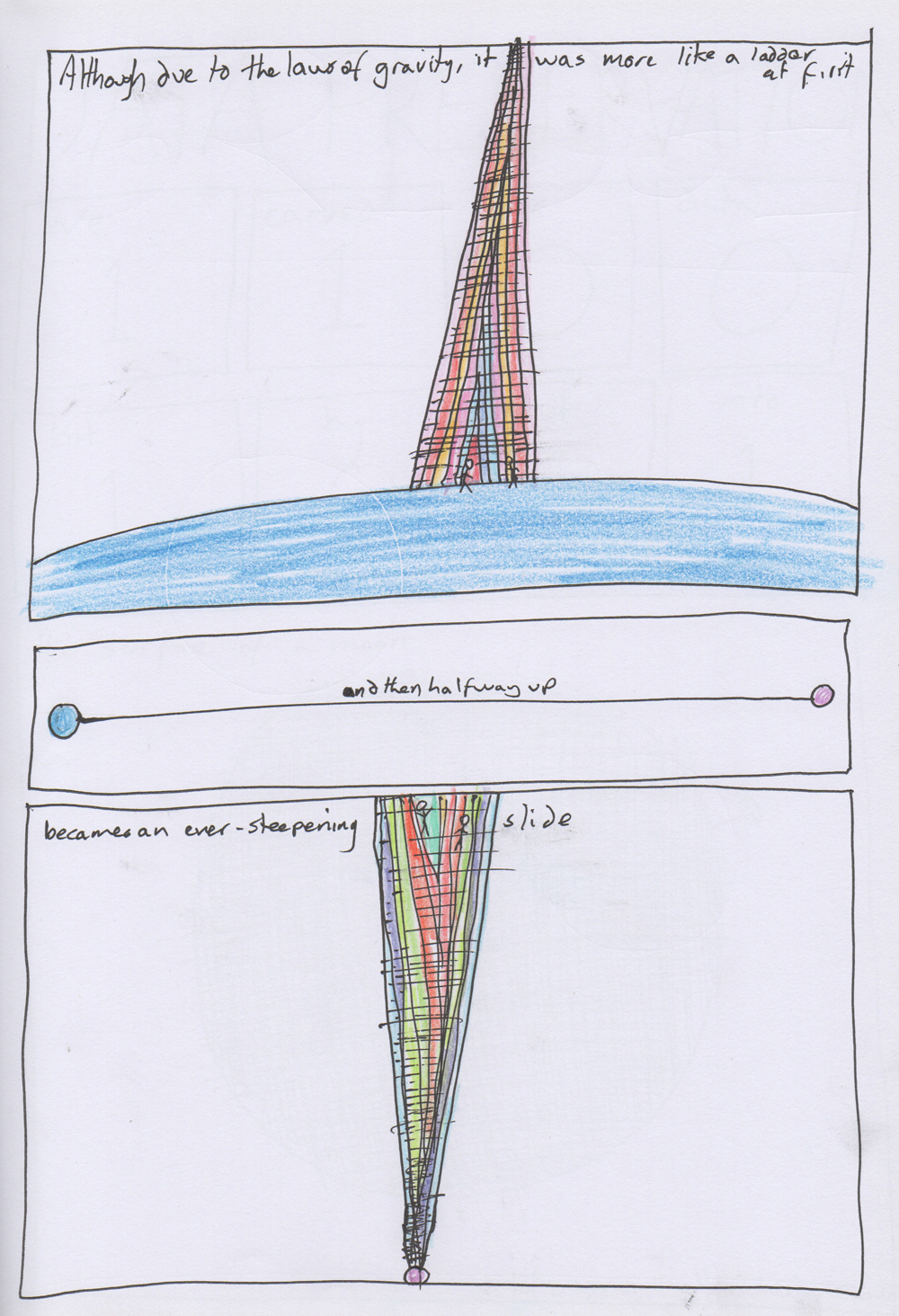 A Thousand And One Tales was my long term, multi-part writing project, that was supposed to encompass a thousand and one tales over twenty years, but in the end fizzled out at a hundred and fifty and about three years or maybe four. Which is still probably more than was necessary.

Anyway, here is a great big list of all of them, for anybody so inclined to read them again, or for the first time, or not at all. It’s okay, it’s over now.

Tale #6: The Farmer’s Daughters
Tale #7: The Woman Who Was Granted Her Wish
Tale #8: The Three Wishes
Tale #9: The Saddest King of All
Tale #10: The Old Lady And The Three Brothers

Tale #31: The castle was a prison in a sea of untouched snow
Tale #32: The Grief Stricken King
Tale #33: The Offered Daughter And The Promised Sons
Tale #34: The Lonely Heart
Tale #35: The Lonely Man’s Tale

Tale #51: The Cat In The Graveyard
Tale #52: The Silk Gloves
Tale #53: A Finger For A Favour
Tale #54: The Search For Lost Things
Tale #55: The Forgetful Prince And The Regretful Bride

Tale #61: (fragment)
Tale #62: Lessons For My Children
Tale #63: And We Went To War
Tale #64: Memorial For The Executed Generals Of The Siege Of Colchester
Tale #65: And In Their Ships They Sailed Out Across The Sea

Tale #91: The King’s Wives
Tale #92: The Morning Birds Free The Soul, The Night Ones Take Them
Tale #93: A circle, whispering time
Tale #94: Beneath the weeping willow she sat down and wept
Tale #95: In The Garden Between

Tale #141: If You Describe Each Moment Of A Person’s Life, It Becomes A List Of Crimes, An Endless Recitation of Horrors, A Biblical Judgement Upon Their Worth
Tale #142: The Ship Sailed Into The Harbour
Tale #143: The Emperor’s Zoo
Tale #144: The King In His Castle
Tale #145: The Ogre’s Boots 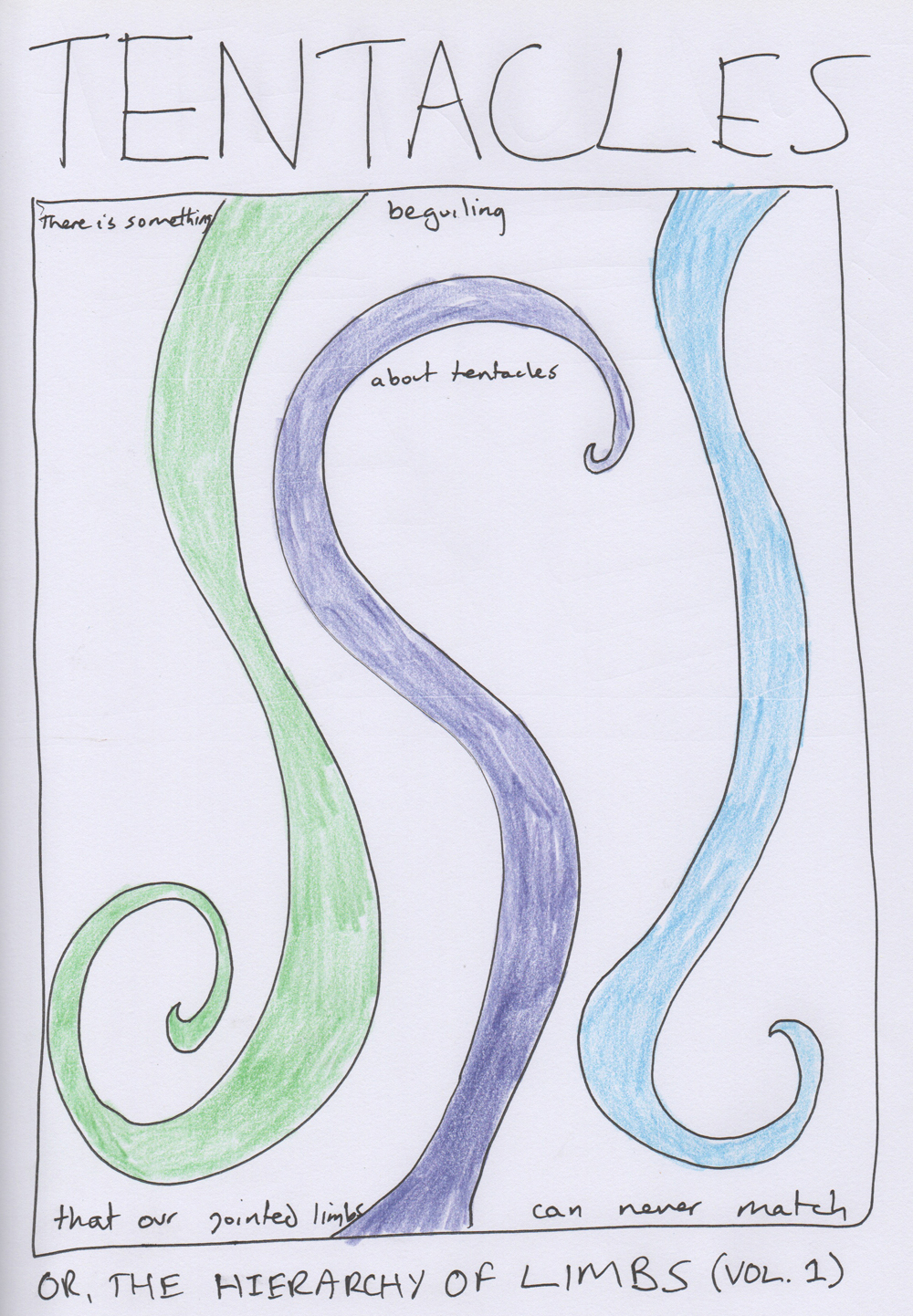 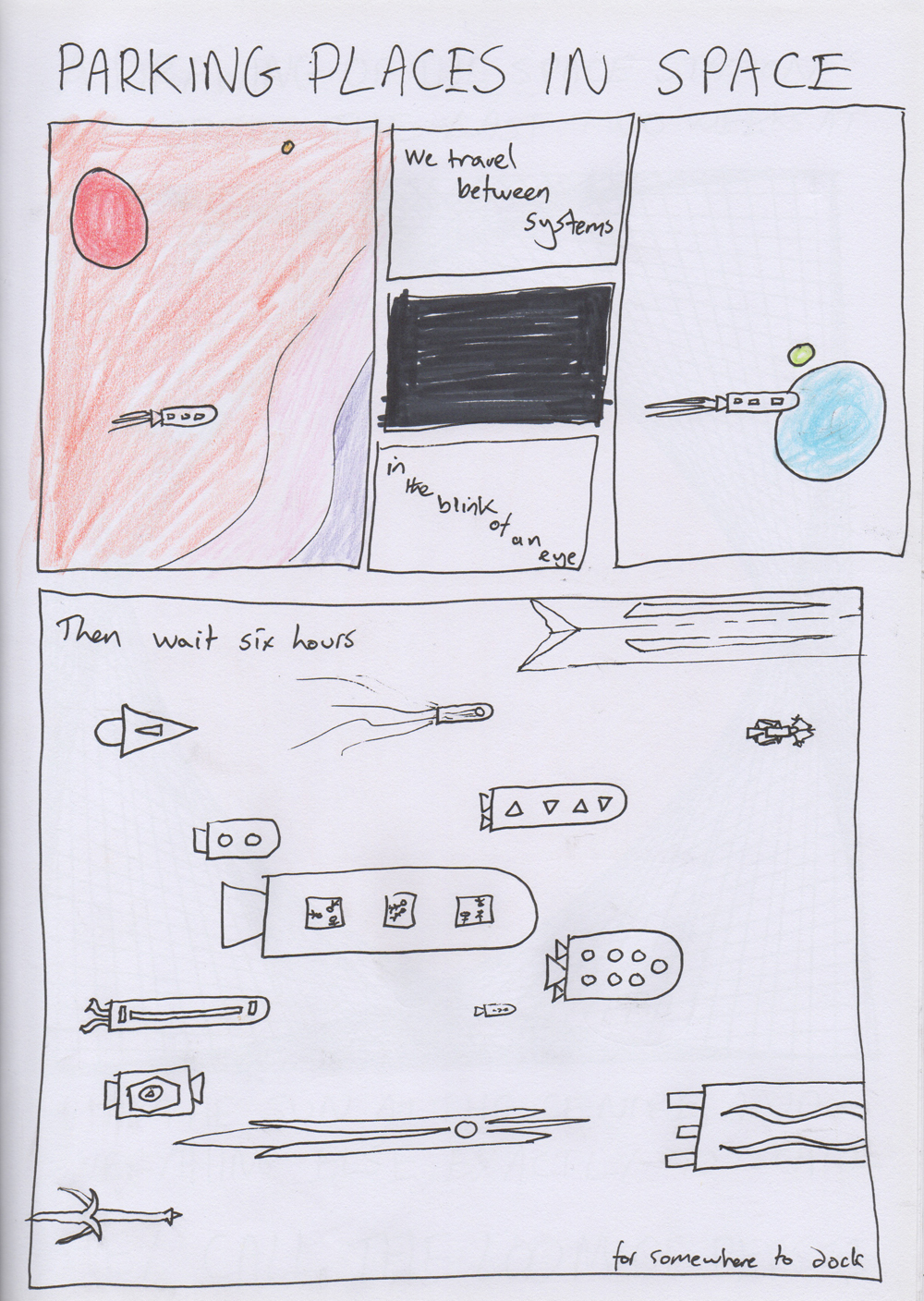 1. Written in July or maybe June or May, 2020
2. This one is slightly out of order with the others
3. Because I forgot to scan it in earlier
4. It was written between Timelapse Of A Single Star and The Loom of Persei
5. But lives here now, ages later
6. In a whole new year

There was a man who had lived for a long time on his own. One day, while walking in the woods, he met a woman and they fell into love. One night, a few quick months later, she fell into labour, and while the doctor and his midwives attended to her the man went outside for a walk.

He headed out into the woods and there was met by men recruiting for the army, and very quickly they impressed him into service. He spent many years away, and was forced there to fight incomprehensible battles in unknowable places for increasingly unclear reasons. He became so weary and distraught by this life of constant toil and terror that it was only his dreams of returning to his wife and child that kept him sane.

Eventually there came a battle the army could not win. A bullet struck him in the lung and he fell down among the corpses of his colleagues and stayed there. When the battle drew to a close and the victorious walked among the wounded to deal them their final blows, he lay still and pretended to be dead in the hope that they would pass him by.

The true corpses attracted the crows. But the crows left his body well alone, for his stench was not yet to their liking. The soldiers drew ever closer, and he feared he would soon be found.

‘Crow,’ he called. ‘Please come here and feed upon me, if only for a little while, so that I may look as if I am dead. For if I am found alive I will be killed stone dead, and never will I be able to return to my love, who I was snatched cruelly from, nor see the face of my child, who was born scant hours after my abduction and whom I have never seen at all.’

Even though the offer was a poor one, for if the man was dead the crow would have his whole body to eat rather than a mere moment’s bite, it took pity upon him and hopped up onto his face. And as the soldiers approached the crow pecked out his eye.

Convinced the man was dead, they passed on by. When it was safe again to speak, the man thanked the crow. ‘And you may have my lung as well,’ he said. ‘For it is dead now inside me, and shall only rot and fester there around my heart,’ and he reached into the bullet hole in his chest and pulled out his lung from within him, much like a magician pulling handkerchiefs from the pockets of his coat.

In thanks for this kind gift, the crow told the man where he was, and how he could get home. The way was long, however, and it took him many years to make his way back. One particularly cold winter in the hills he lost his toes to frostbite, and one especially hot summer by the sea he lost his hand when a mouthful of water stolen from a king’s fountain was punished as severely as could be.

It was well into the sixteenth year of his exile when he finally arrived home. He knocked on the door of his old house and a woman answered.

‘What happened to you?’

‘I lost a lung to a bullet, and my eye to a crow. I lost my hand for water, and my toes to snow. But all these years I have saved my heart for you.’ And he opened up his chest and pulled out his heart and placed it beating in her trembling hands.

‘What would I want with this?’ she asked. ‘What could I want with it? I hardly know you. I hardly ever knew you. You left and the world went on for all of us. You didn’t save your heart for me. It was always yours, and yours alone. The dream of me that kept you alive was a dream, and was not me. And it was your dream, and yours alone. Give your dream-wife this heart, and leave me to mine.’

And she handed him back his heart, and went on with her life. And he, eventually, with his.

1. Written in February 2015
2. This was first published in November 2018
3. In An Outbreak Of Peace, edited by Cherry Potts, and published by Arachne Press
4. Which is a very nice book
5. Filled with very nice stories
6. Much better than my own.
7. Also in 2015, this was adapted into a song
8. Also called The Man Who Left
9. By Vom Vorton
10. And which you can listen to below:

There was a man who lived alone, and one day he went walking
while in the woods, he met a girl, and soon they started talking
inevitably, they fell into love, and one night, some months later,
he took her to the hospital as she had entered labour
for hours she howled and thundered, in pain and drenched in sweat
and so the man went for a walk, to the place where they had met.
He stumbled across men who were recruiting for the navy
they were not the kind of men who accepted “no” or “maybe”

and so he missed his child’s birth, he was not holding her hand
he was fighting for his country in wars he didn’t understand
and at night, as the ship shook and he feared for his life
he kept himself sane with thoughts of his wife
then one day, a battle came that they could not win
a bullet hit his chest, struck a lung and stuck within
he fell among his colleagues, and played dead upon the deck
but he heard footsteps come closer and he knew that they would check

he saw a crow pecking at a body nearby
and said “crow, come here, and peck out my eye
if the soldiers come closer they will hear my breath
but if they see you feeding on me they will believe in my death
and I may yet survive to return to my home
to the wife that I love and the child I’ve never known”
the offer was a poor one, but the crow’s stomach was full
so it was inclined to take pity and pecked the eyeball from his skull

when the soldiers had retreated and it became safe to speak
the man thanked the crow, eyeball dripping from its beak
and said “since my lung is dead in my chest
I will give it to you to take back to your nest”
pulling flesh from his body like tissues from a sleeve
the crow took his offering and started to leave
but not before telling the man where it was that he lay
and, knowing of his hometown, he told him of the way

the man was far from home and over winter he froze
through the snow he continued, but frostbite took his toes
and in summer, it was hot, and after stealing holy water
the king took his hand, after sparing his slaughter
after many years of exile, he found a place he knew
and a woman answered quietly, “Is that you?”
she looked at his face and his clothes, torn and blackened
and she quietly asked “what on earth happened?”

“I lost a lung to a bullet, and my eye to a crow.
I lost my hand for water, and my toes to snow.
But my mind remained strong and my love remained true
and all these years I saved my heart for you.”
With his remaining hand he pulled his shirt apart
And he opened up his chest and pulled out his heart
“I carried this for you across the oceans and lands”
and he placed it beating in her trembling hands.

“What would I want with this?” She asked. “I hardly even met you.”
“You left and the world went on. We started to forget you.
You didn’t save your heart for me. It was always yours alone.
That woman in your dreams was not me, but a clone.
She only existed in the shadows of your mind.
Give her this heart, and leave me to mine.”

And she handed him his heart, and forgot his name.
And eventually, he did the same.