It was a commonly held belief that heaven resided in the earth and hell within the air. Crops grew from the ground, while fire and smoke rose upwards.

Worms were believed to be new souls struggling to the surface from heaven, and only with the help of the morning birds could they be pulled free and delivered to the newborns that needed them. A child born in the morning was said to be blessed with a good soul.

Upon death, the body was returned to the ground, so as to be nearer heaven. The bodies of the sinful and the condemned were hoisted up and left on the roofs of houses, so that the evening birds (crows, gulls, owls) could pick clean their bones and take not only their flesh but their souls up into the skies towards damnation.

yet another
collection
of these poems

that aren’t really
poems at
all, now, are they

the whole point of
this is that
it annoys you

there is not a
clear way to
say this at all

scratching away
the paper
each word a scar

i do not like
who i am
even slightly

my brain has shrunk
like a voles
in midwinter

lost in a dream
of a life
hazy, drifting

lost in a dream
of my own
constant failings

lost in a dream
of a world
unrecognised

seven egrets
in a row
still as statues

a thousand ducks
braced against
the winter wind

crow flying off
holding an
egg in its beak

the cormorant
dives below
gulls hover above

a swan’s feather
floating past
caught in the wind

#95: the coming end of the bird poem cycle

cat sauntering
across road
over the fence

the puddle fits
perfectly
in its own hole

this little box
is full now
of written words

so many words
i shouldn’t
ever have said

a perfect world
as silent
and still as snow

1. Written in September and October 2019
2. The three previous collections of 4/3/4 poems can be found here, here and here
3. Bird poem #3 was actually based on a misidentification
4. And it was a walnut in the crow’s beak
5. rather than an egg
6. I disocvered this yesterday, when a crow dropped a walnut on the road in front of me
7. from it’s perch on the roof of the house
8. trying to crack it
9. but failing.
10. But then I noticed that the whole road was littered with walnut shell shrapnel
11. pleasing proof of their eventual success

It is often tempting for outside observers to judge a society or community solely by its traditions, rituals and festivals, to bestow a significance and seriousness onto events beyond that which they hold for their participants, to see superstition and fear in theatre and frivolity. Equally, of course, the reverse can be true for those involved, leading to a refusal to recognise the serious intent that underpins their festivities.

The event which takes place at the crow tree is one of the community’s least talked about rituals, and consequently can be assumed to be among its most serious. Indeed, there appears to be no written record of the ritual at all, although there are verified accounts of the tree used in the ritual itself dating back to the 15th Century. While the community’s own folklore suggests the ceremony has always taken place, nothing certain about its origins are recorded, and no speculations about its meaning would be offered to me.

(The strict criteria can lead to several convoluted possibilities where the mothers of daughters are concerned. For example, a mother’s first daughter might not be the father’s first daughter, and in this case the ritual would not be required. However, this same mother’s second daughter might then be fathered by a different man, one who has not fathered a daughter before, and so it would be this child that would necessitate the ritual. And of course this hypothetical mother could have more daughters by more new fathers, and so on. Indeed, it is possible for a mother to have to participate in the ritual with each of her daughters, while another woman may never have to, regardless of the number of daughters she has.)

If the child, the father or the mother have died before the ritual has taken place then a lament is sung by the surviving members of the family at the edge of the field where the ceremonial tree, or crow tree, resides. In these circumstances it is not permitted for the survivors to approach the tree itself during the course of the day.

In recent years, due to the decline in births within the community, it has been rare for there to be more than one family needing to perform the ritual in any given leap year, and indeed in some recent leap years the event has not taken place at all.

In times of a more populous community, however, when multiple rituals were to be carried out during the same day, the participating families were ordered by the age of the child involved, with the eldest girl first and youngest last – a reflection, perhaps, of the length of time they had been waiting to perform. On busy days it was said that, despite there being no apparent communication between the families, each group would arrive in the correct order, equally spaced apart, and that all the rituals would be finished in good time, well before the sun had set.

The ritual itself is one of the most sombre in the community’s complex calendar. No work is conducted on the day itself, and it is traditional for everyone who is not directly involved to stay inside their own houses, although this is not compulsory. No costumes are worn, and the tools used are not ceremonial objects, instead being everyday household objects or workplace items.

The ceremony starts with the father leaving his house at dawn. He makes his way to the edge of the field and waits by the gate. The mother and daughter do not hurry, although usually they will arrive before noon, and always before dusk. The mother carries with her a pail filled with breadcrumbs, offal, fish guts, bones, butter. The daughter carries a length of rope and a knife. When they arrive at the gate to the field, the father wordlessly leads the way in and they walk together to the crow tree at the centre of the field.

The crow tree is a long dead oak, its trunk and branches bleached white as bone by the sun. Other dead oak trees dot the field, but the crow tree is the only one that remains completely bare of ivy or lichen. It is believed that the trees in the field were killed by the sea hundreds of years ago, although the field is many miles inland. The trees themselves are so cold and solid it is tempting to believe they are actually made of stone.

The father stands with his back to the tree. The rope is tied around his left wrist, looped round the tree, and then secured around his right wrist. The daughter pushes her knife into her father’s belly as deeply as she can.

“Speak,” she says, and her father speaks.

They listen. His words go unrecorded.

“Sleep,” says the mother, and, removing the knife from his belly, she slits his throat.

His body is cut down from the tree and dragged a short way from the trunk. The food from the bucket is spread in a circle around him. The knife is placed in the pail, and the women, hand in hand, leave.

Overnight the crows come down from the tree and feed, either upon the flesh of beasts or the flesh of man. In the morning, as the crows return to their roosts, the father is reborn.

Thus judged, some fathers make their way back to town, bucket and knife in hand, and return to their former lives. Others leave, and are not known to be missed.

The crow looked at the corpse beneath its feet and thought about the inevitability of death, and the futility of life.

Still, the crow ate on. 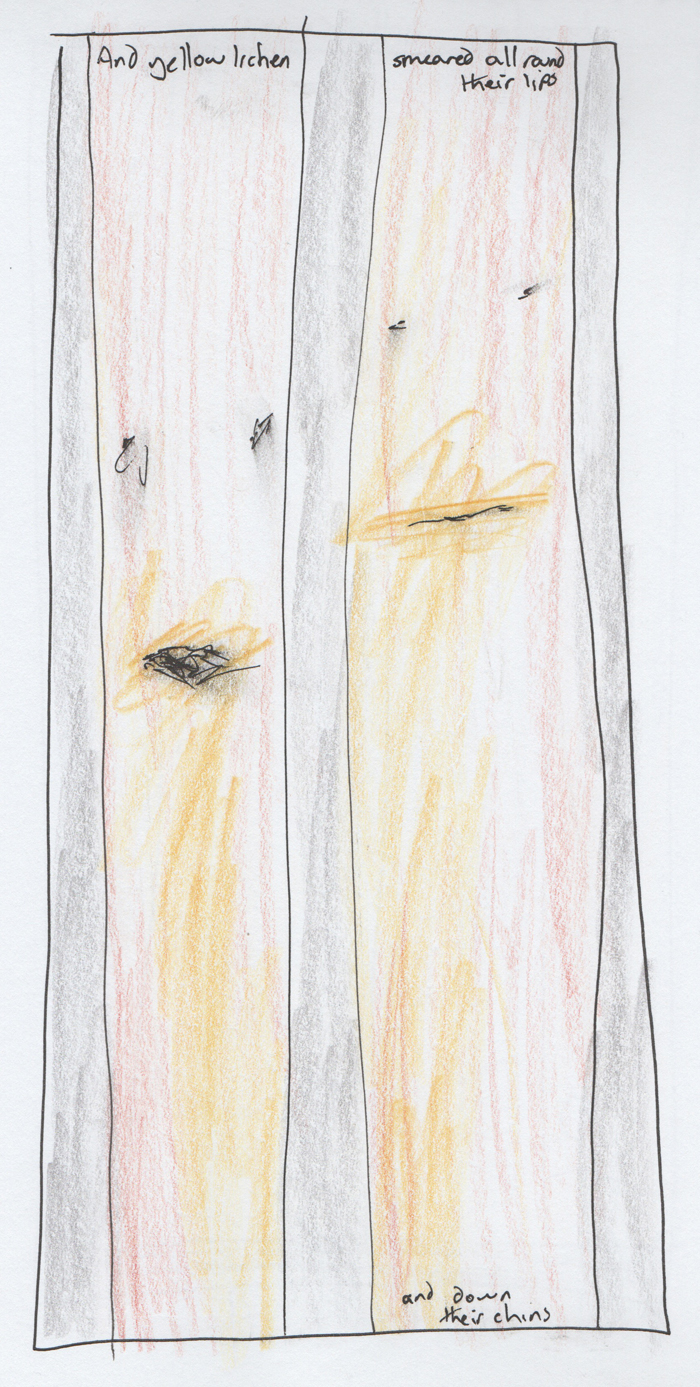 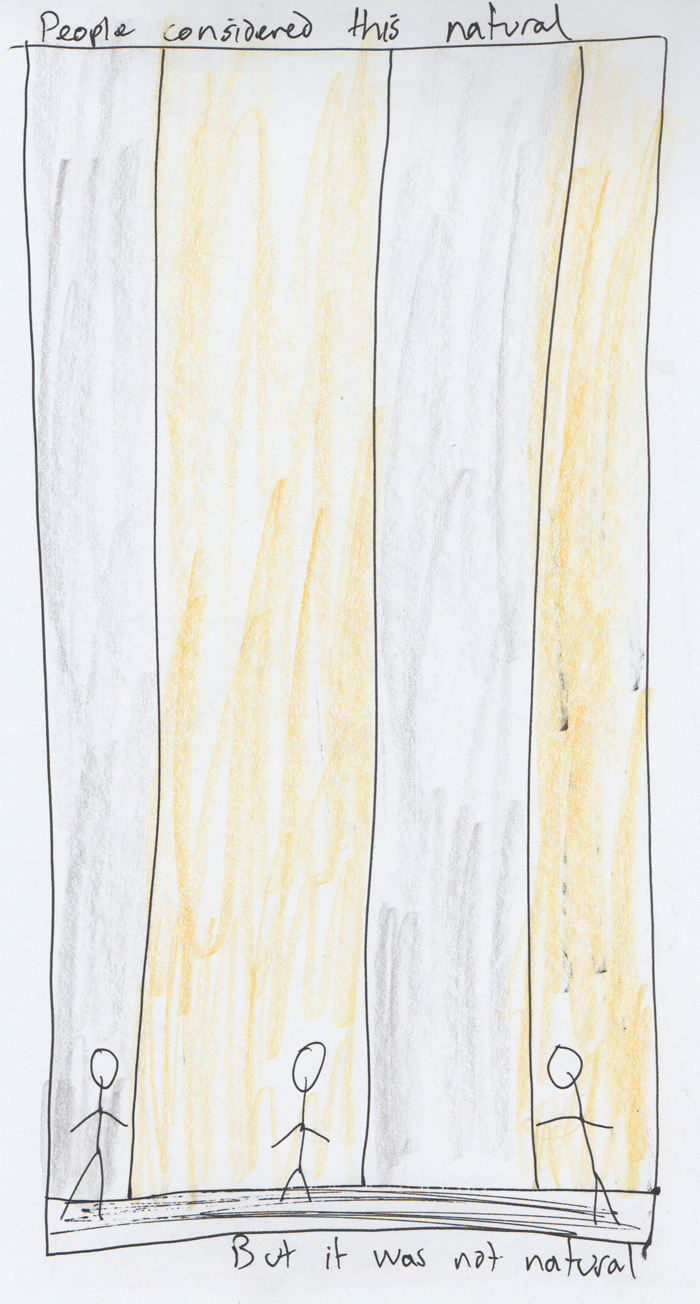 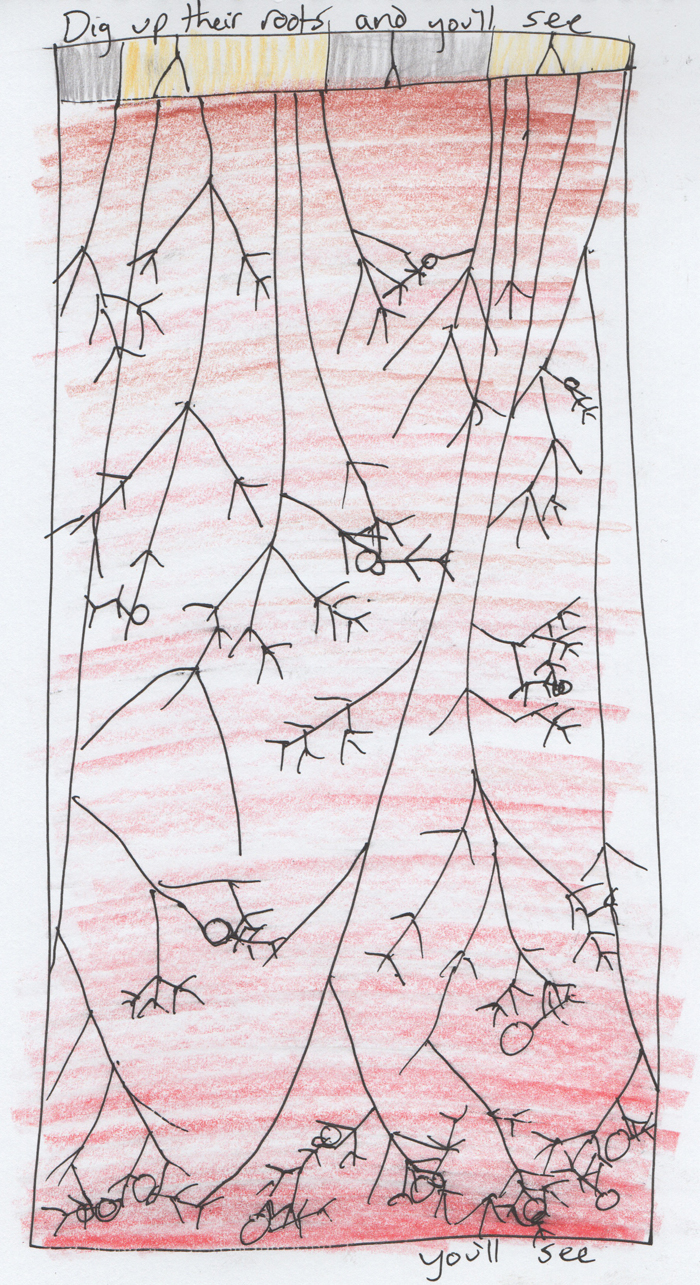