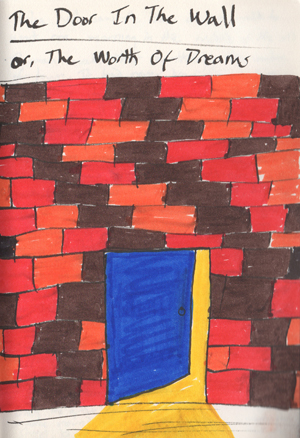 The first time Yulia saw the door was on her walk to work one morning, in the middle of the old Roman wall that ran through the centre of the town. It had never been there before. But there it was, locked and closed and as solid and real as the wall itself. She couldn’t stop thinking about it all day, this out of place door in the middle of that wall. When she came home that evening, it was gone.

The second time she saw it, it was down near the abandoned pub, in the wall circling the beer garden. A different wall, but the same door. It was unmistakeable. She was on the bus this time, and caught only a glimpse of it, but she was sure it was open now, not fully, but slightly ajar at least, a shaft of light shining though the gap and illuminating the pavement with an ethereal glow.

Then the bus rattled on towards its destination, and all Yulia was left with was the memory of it on her retinas, a patch of shimmering blue superimposed over the dismal and the dull of the town in winter.

The third time the door was on the other side of the street, opposite the shop, in the ruins of the old gallery, directly in her line of sight for the whole of the day. It was wide open, and Yulia could see through to what lay beyond. And what she was a world of wonders, a shifting infinity of possibilities, each one more enticing than the last, more beautiful than any heaven.

Only the queue of her customers, which stretched twice round the shop and back down the street, kept her from getting up from her chair and crossing the street and stepping through that door and never coming back.

Yulia knew it was all a dream, but that hardly mattered. She’d seen it now. Seen through and beyond to something else, something other than this. All she had to do was was wait. Wait for the door to return, for her to take her chance. There were other worlds than these.

1. Written between June 7th and June 14th, 2021
2. The title is taken from an HG Wells short story
3. And the last line is taken from The Gunslinger by Stephen King
4. But the bits in between are my own

For two months Little Sparrow and her mother hid there in the dark, drinking from the spring that bubbled up through the rocks, eating what little food they had in their packs, holding each other in the dark for warmth, singing to each other for comfort.

But in the third month, the waters in the spring froze, the food in their packs dwindled away to nothing, and the nights became so cold they needed a fire to keep from shivering to death as they slept. So each morning at dawn, and each evening at dusk, Little Sparrow crept from the cave and would flit from tree to tree, crawl through the long grass, and slip silently through the whispering mists of winter.

And like this, for two weeks Little Sparrow filled their bottles in the stream, picked mushrooms in the meadows, and gathered fire wood from the forest, all without making a sound, nor ever being seen by any living soul.

But in the third week, she lost her footing on the river bank one morning and slipped into the stream, and the sound of her splashing echoed through the forest, across the fields, beyond the hills, as loud as cannon fire, as loud as screams. Soon the woods were full of the king’s men, and it was long past sunset before she could find a way back to their cave unseen.

Alas by then it was too late. In the pale phosphorescence of the cave, Little Sparrow saw her mother by the cold ashes of the fire, the king’s huge silver sword plunged through her back and into her heart, her body cold and dead, the only sound the drip drip drip of her blood as it blossomed across the floor and trickled down the rocks to melt the waters of that icy spring.

On the third day, Little Sparrow pulled the sword from her mother’s heart and went out in search of her father the king. The sword was so huge and heavy she could not carry it, and instead had to pull it along behind her, both her hands on the hilt, her back to the path as she walked. The tip of the blade cut a channel in the ground that led all the way back to her mother’s tomb.

On the third day she came to the King’s camp and stood before her father, his huge sword still held tightly in her hands.

“Little Sparrow, come home to roost,” he laughed. “Are you going to peck at me with that blade of mine? It looks a little big for you!”

“This sword is not for me, father,” Little Sparrow said. “I brought it back for you.”

She spun round once, twice, and on the third spin she let the sword go and threw it across the dirt towards her father’s feet. The king picked up his silver sword, and as he held it up with one hand towards the sun, Little Sparrow laughed.

“A coward’s blade for a cowardly king,” she said, and in his rage her father the king swung it down upon Little Sparrow’s neck.

For two hours she followed the trail of her father the king’s blood, as it trickled down the channel left by his sword, all the way back to her mother’s tomb. And in the third hour…

1. Written between November 18th and November 20th, 2019
2. The first line is taken from The Gunslinger by Stephen King