I heard the following tale from both my aunts when I was a child, a year or so apart.

I’m not sure if you’re supposed to think of your aunts this way, but I always did, when I was young – one of them was from within the family (my mother’s sister), the other from without (my dad’s brother’s wife). That one of them was a real aunt, the other merely playing one.

Nowadays, I’m not sure what to think.

Anyway, they both told this story slightly differently – different setting, different details, different phrases, different folksy claims of authenticity – but beyond that, they were the same tale, in all the ways that mattered.

A long time ago in a land far away (or, in the other telling, in the town where I grew up), there lived a princess (or a girl, just like you or me) in a castle (or a house). She had no brothers (nor any sisters) and her parents were too busy with the affairs of state (or, quite simply, too dead) to pay her any mind. So the girl/princess would wander the halls of her castle (or the streets of her town) all on her own, searching, always, for something, some sign, some proof that she was loved (or had been loved).

One day a woman came to see the princess at court (or, more simply, knocked on her front door) and said, “I’m your aunt, and I love you as if you were my one and only child.” And the woman stayed with her for the rest of the year, accompanying her on her walks, reading her stories before bed, helping her get dressed in the morning, and always, always, treating the lonely girl with love and tenderness and the utmost care.

On the princess’s 8th birthday (or the girl’s 9th), the aunt said, “I must return to the land where I live. Come with me, little girl, and leave this sadness (and loneliness) behind. Be free of your neglect, and stay by my side.”

And it was here that the tales diverged.

The tales ended very differently, and these were differences that were genuine rather than merely cosmetic. Not different hats so much as entirely different faces. A wolf revealed beneath the mirrored kindnesses of my aunts’ smiles.

In the first, the princess goes with her aunt. But when she arrives in the distant land her aunt called home, the aunt’s demeanour changed. “Obey me, now-child-of-mine, and do as I say. Serve me as a servant and a slave, from dawn until dusk, else I’ll eat you up for my dinner and that will be that.”

So the girl lived in fear, for the rest of her days. And no-one came to save her, for none knew where she had gone.

The moral of this tale as I perceived it then, whether or not that was what was intended: quit your whining, accept your place, for there’s a world out there worse than whatever you hate about home.

The second telling, the one I preferred, the orphan girl again goes with her aunt. She leaves behind her empty house, her lonely town, and walks with her aunt across the country.

Finally, the girl can walk no more and collapses to the ground. The aunt removes her clothes, takes off her mask, gets down on all fours, and leans over the girl, her jaw wide, her teeth sharp, her tongue as red as blood. And in her lupine voice, she says, “I’m not your aunt, I never was. I came to you because you were alone and unprotected.”

The mouth gets closer, opens wider. The girl waits for the snap of the jaw, the rasp of the tongue, the bite of the teeth, the pain that will surely come as she’s gobbled up and eaten whole.

But instead, the wolf says, ”I will carry you the rest of the way, my child.”

And with a deft flick of her head she flips the girl into the air and onto her back, and together they travel over the hills, into the woods, far, far away, living happily together ever after.

It was a fairy tale, after all.

The moral of this one: there is kindness in strangers, there is love out there if you will let yourself look.

After I heard this second telling, I wondered which of my aunts was the woman, which the wolf. Always, from then on, I’d be looking, checking, staring, hoping to see some slip of the mask, whether real or metaphorical, to catch the truth of the smile, see a glimpse of the real teeth beneath the false.

To see if their kindness masked cruelty, or if it hid an even deeper kindness, hid love without want, without need, without end.

1. Written in June 2018
2. There was a documentary about Angela Carter on BBC Two with the same title as this
3. Which was first shown in August 2018
4. My use of the same title is purely coincidental
5. But nicely serendipitous 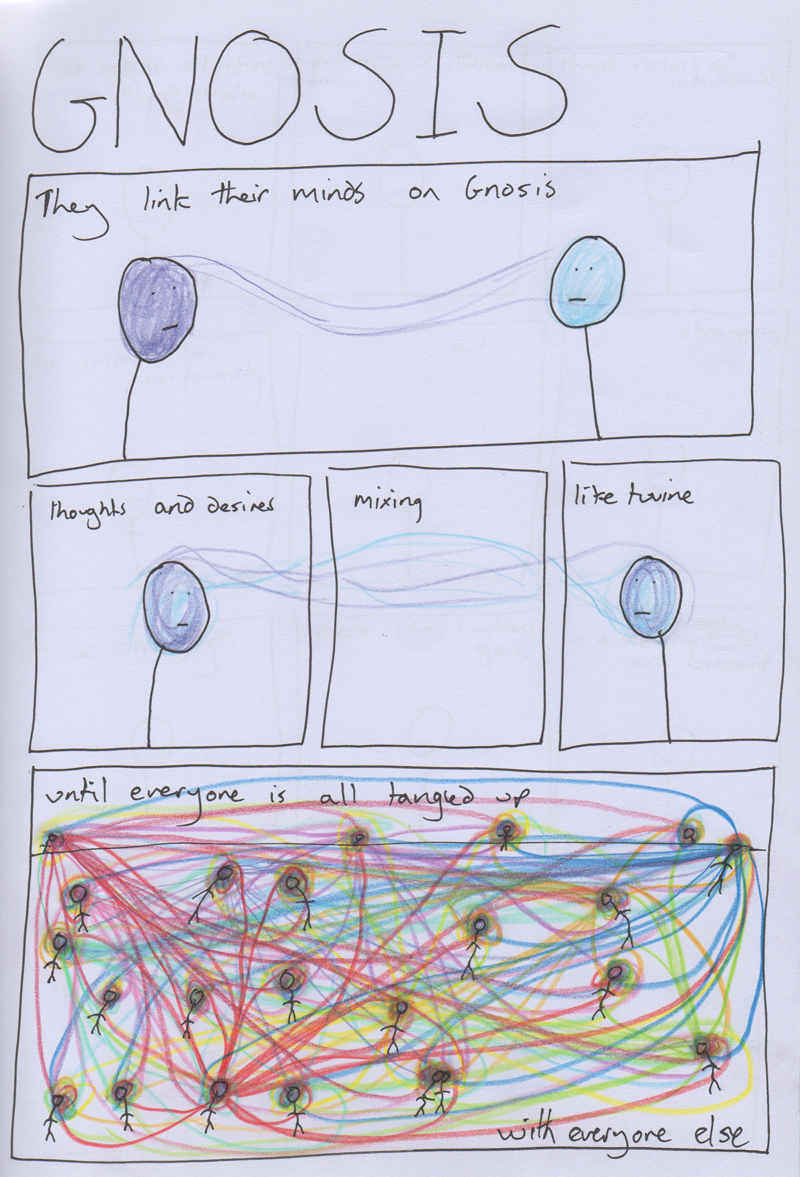 1. Written on June 4th, 2019
2. There was originally a second page to this
3. But the pictures weren’t very good
4. Although the words were okay
5. But even that was not enough to save it

When I can talk again
I’ll call for you

When I can see again
I’ll look for you

When I can walk again
I will come for you

A couple lived together for many years, and many things went unspoken of between them. Eventually what was left unsaid was left forgotten.

At first this loss seemed inconsequential to them both and they carried on together as if nothing was any different. In this way even more years passed, and although something between them had changed they could not say what.

One day the thought of it returned, as if a fish had risen out of the murk and broken the serene surface for a much needed gulp of air. It did not surface for long enough to allow them to see its true shape, yet the ripples spread out across the lake of their minds and could not be denied.

The desire to reclaim what had been long forgotten, and longer lost, eventually consumed them. In their frenzied search they tore the house apart. They tore their friends apart, and their family too. They tore apart their past and their future, their happiness, their hope.

And there it was at last, in amongst the rubble and the blood of their shredded hearts. A crystal barb glinting in the firelight. Tiny and fragile. Huge, all encompassing.

One of them looked at it and turned away. He said, “Is that all it was? That tiny sliver of a thing? No wonder we let it go and left it where it lay.

“And now we’ve found it, what good will it do us? What benefit will it bring? We should have left it where it was. And we should bury it now, as deep as we can, and carry on again as if it had never been found.”

Would not look away.

He saw the tears in her eyes Trying not to see what those tears reflected back at him, he said, “Was it worth it, all this destruction, all this fury and despair? Was it worth it, for something so small, from so long ago?”

“The truth is worth whatever it costs,” she said, and reached down and picked the bones out of the ruins of her old heart.

And she put the forgotten things back where they belonged and made herself whole again.

I was, O Lord, deep in thought in the garden of my house one afternoon when I was awakened from my slumber by a calling from above.

A cat sat in the cherry tree and it said down to me, “You look all alone. Would you give me some dinner in exchange for an afternoon of my company?”

And of course I said yes and the cat leapt down from the tree and settled on my lap. And she purred as I stroked her and the afternoon passed in contentment for the both of us.

As the sun began to set the cat leapt from my lap and went through the back door and into my house. Inside, I found in my kitchen not the cat but an anteater. It was a huge beast, and with its long snout it snuffled through my cupboards and opened up my jars of sugars and sweets, and with its long tongue it licked out the food within until the jars were spotless and clean.

Once it had finished eating the anteater turned to me and said, “You look all alone. Would you give me somewhere to sleep for the night in exchange for an evening of my company?”

And of course I said yes and the anteater sat at the kitchen table and together we played cards for the rest of the evening. And time passed pleasantly for the both of us.

As the clock chimed midnight, the anteater played her last hand and said goodnight and got down off the chair and went into my bedroom.

Inside my room, I found not an anteater but a woman lying in my bed. And she looked up at me and said, “You look all alone. What would you give for a night of my company?”

I said, “All that I own,” and she pulled back the covers and invited me in.

The next day, O Lord, I was alone again. And I was deep in thought in the park of our town when I was awakened from my slumber by a calling from above.

A crow sat in the peach tree and said to me, “I watched you all day, and I watched you all night. If you would give up everything you have for a dream of a woman, what would you give to truly end your loneliness once and for all?”

And I said to the bird, “I may have given her all that I own, but not all that I have, for I still have my heart. And to truly end my loneliness, it would not be enough to give it away. It would have to be taken.”

The crow listened to what I said. She hopped down from her perch and opened my shirt with a swish of her wings and with her beak she cut open my chest and tore away a tiny sliver of flesh from the corner of my heart. Then she took wing and flew high up into the sky.

And, O My Lord, I followed.