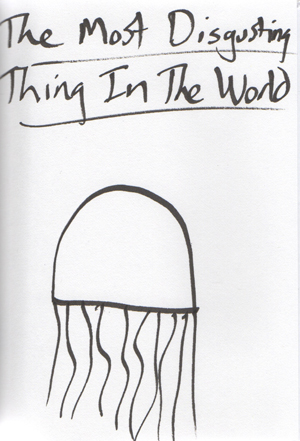 “The most disgusting thing in the world,” Claire said confidently. “Is swimming in the sea and a great big jellyfish comes along and it goes over your head like a plastic bag!”

“The most disgusting thing in the world,” Tina said. “Is having your eyeballs pulled out and turned round and pushed back in again so you can see your own brain!”

The most disgusting thing in the world,” Daniel said. “Is bananas.”

“‘Are’ bananas,” Ethel told her brother.

“Or ‘is’ banana,” suggested Claire.

“Anyway,” said Claire, looking at both Tina and Daniel with a glare so intense it knocked over the ketchup. “Bananas aren’t disgusting at all.”

“They are,” Daniel said with a shudder, as he thought about bananas for a second too long. “They’re horrible.”

“They don’t make me feel sick,” Claire said. “And even if they did, they wouldn’t be disgusting as sick!”

“Or sick with maggots in it!”

“What about a banana with maggots in it?” Daniel asked. “And the maggots are being sick in the banana?”

“And the banana’s in a sandwich!”

“And mum’s eating the sandwich!”

“And I’m eating the sandwich!”

“And then someone shoves the sandwich right through your eye and into your brain!”

“And then your brain EXPLODES!”

“And then some pigeons come along and start eating your brains!”

“And then the pigeons explode!”

“And then we have to eat the pigeons!”

“And then we explode!”

“And then we have to eat ourselves!”

“And then we explode AGAIN!”

A big dinosaur and a little dinosaur were walking through the swamp together.

“God, you’re so small,” the big dinosaur said to the little dinosaur. “So small and tiny and pathetic.”

Although he only said that last part to himself rather than out loud. You never say those bits out loud.

“And you’re so big,” the little dinosaur said to the big dinosaur. “So big and huge and amazing!”

The little dinosaur was so excited he even said that last part out loud. He couldn’t help himself. Everyone knew it was true. Big dinosaurs were brilliant. All the stories said so. Big dinosaurs went on exciting adventures and had all this amazing fun together and all their friends were beautiful and they lived in the biggest caves and everything. It was so cool.

The only stories anyone ever told about little dinosaurs were ones where everyone was miserable and dying and ugly and dead. Who’d ever want to listen to those?

“Well, you just need to put the work in,” said the big dinosaur, magnanimously. “That’s what I did. I didn’t get this big by lazing around all day doing nothing! I did it by working my bloody arse off!”

“I work hard,” said the little dinosaur. “I catch and eat a fish every single week!”

“That’s not work,” snorted the big dinosaur. “I eat a thousand pounds of swamp grass every single day! That’s the sort of work you need to put in if you want to move up in the world. No fucking lazing around in the sun for weeks at a time. ‘Oooh, oooh, look at me, I’m metabolising my food!’ Pathetic. You don’t see us big dinosaurs napping on the job. No, we fucking digest our food while we eat it. We don’t even stop eating while we talk. I’m eating right now! See! See!”

The big dinosaur bent down and took another big mouthful of swamp grass, spitting great lumps of it in the little dinosaurs face as he fantasised about shouting at the stupid pathetic lazy workshy little arsehole. Fucking little bastard! As if you could ever be as big as me! Bigger! What a fucking cheek!

The little dinosaur ran away and cried a bit probably and then resolved to improve itself in the face of adversity, because that’s what little dinosaurs always do in the stories. So much bloody crying. And resolving. Always resolving. Resolving to do this and that and the other and whatever. Fuck them. Little shits.

“Hah!” the big dinosaur laughed down at the little dinosaur. “Less than day of hard work and you’re already sleeping on the job. Typical!”

Later on a group of medium dinosaurs appeared and fought with each other over who would get to eat the little dinosaur but no one was watching by then because honestly what would be the fucking point. 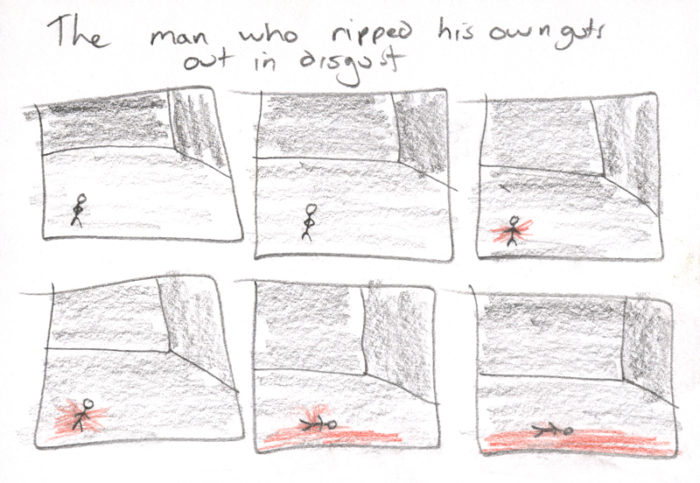 I sweat when I desperately don’t want to sweat.

I sweat at the thought of sweating.

Sweat is not allowed. Perhaps it is in others, the fit, the healthy, the confident, the liked, but in me, no, never. Clothes are chosen in colours to hide the stains as best they can, t-shirts covered by a jumper when that doesn’t work, even in summer, even in the sun. A jacket finally, in this ridiculous futile charade, this self imposed feedback loop of increased sweat production, as I hope to hide what I cannot stop, hope to hide what can’t, ever, be hidden.

I sweat so much.

I sweat so much the arms of my t-shirts get soaked down to the elbows, halfway down to the waist, so much that the two circles centred round my armpits almost reach each other in the middle, a venn diagram of shame.

I sweat so much my jeans stick thickly to my legs, making my knees ache when I walk. I sweat so much the material of my boxers clings wetly to the tops of my thighs, chafing against the skin there until its as bald as if its been waxed.

I sweat so much some days I can barely use my phone, the screen unresponsive under the wetness of my thumb, necessitating a frantic rubbing of the screen against the left thigh of my jeans, the drying of my hand against the right.

I sweat so much it drips onto the page as I write this, the ink running beneath the drips, spreading like fungus to the edges of each dropletted circle on the page.

I sweat so much my whole skull aches. I sweat so much I feel like I’m dreaming, a strange sense of unreality, a feverless delirium, that comes in waves and only slowly subsides.

When I wake in the morning, there’s a perfect outline of my body drawn in salt upon the sheets. At least if I die at night, the police won’t need to waste their chalk.