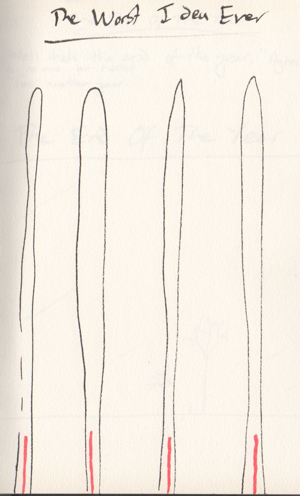 Thermometer racing. That was their new game. The four of them had all spent this week’s pound on a thermometer each and now they were home they left them in the sun so they could play this new sport they’d just invented where your thermometer had to beat their thermometers to the highest temperature of the day (while also accruing points for reaching significant milestones along the way).

Thermometer racing. They all agreed this game wasn’t just the worst game ever but the worst idea ever too. The worst idea any of them had ever had. The greatest waste of their money and their time and their lives and an entire Saturday ever ever ever.

Thermometer racing. Even the name was awful. They’d said thermometer so many times by now it made them all feel sick but still they couldn’t stop saying it because they were trapped in some delirium loop now, too furious to stop.

Thermometer racing. The only thing about it they couldn’t agree on was whose idea it was in the first place. The arguments about that, at least, were worth every penny.