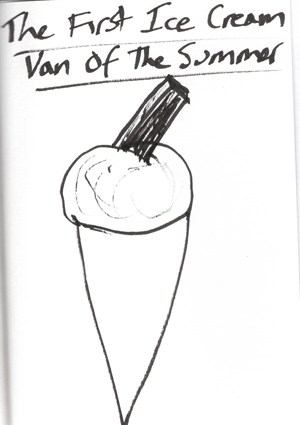 Agnes was in the kitchen when she heard the music in the distance. A chill ran down her spine. She closed the laptop and waited for what was sure to come.

Footsteps on the stairs. Doors flung wide. A swarming crowd of desperate faces, raised from some winter-long hibernation.

“From the ice cream van!”

“We’ve got a freezer full of ice creams,” Agnes said. “Can’t you have one of those?”

“But they’re not the same!”

“The ice cream van has more.”

“They are not colder.”

“Last year they had some we’d never seen before!”

“Well, our ones aren’t horrible,” Agnes said. “I got the ones we all like.”

“You said if we’d been good we could have an ice cream!”

“From the ice cream van!”

“I don’t remember saying that at all.”

“Okay, okay,” Agnes said, fishing out some small change from the pockets of her jeans and dropping it into their grasping mitts. “But don’t just buy the ones we’ve got in the freezer!”

Footsteps in the hall. Doors slamming shut behind them. Cries of excitement fading out down the street.

Agnes sat down at the table and sighed. Of all the things in all the worlds, the continued existence of ice cream vans was the thing she understood the least.