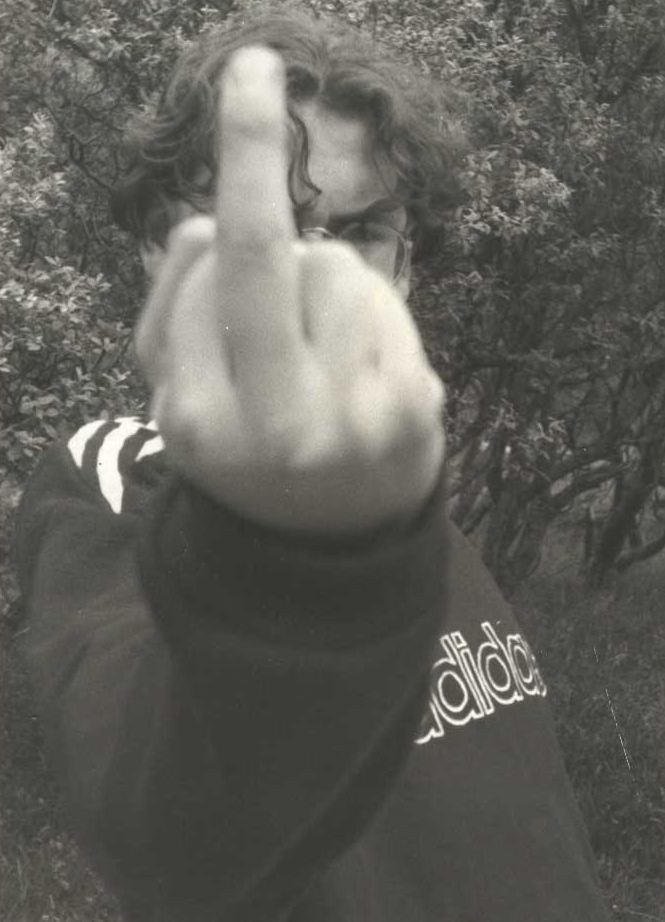 You. You’re six foot two. Six foot two and fourteen stone but that doesn’t matter because you’re a coward. A coward and a wimp. They know. They all know. They all know because they’ve always known because they’ve known you all these years and there’s no growing up away from it, there’s no changing who you are, who you were. They know and you know and that’s all there is to it. It’s too late for anything else. There’s no escape. Not now.

You’re sixteen. Sixteen and six foot two and you’ve got long hair and you’re greasy and you stink. You can’t smell it, you can’t smell anything, but you know it. You know it and everyone knows it. You can feel it. You sweat and you sweat and there’s nothing you can do to stop it. You dread sitting next to people in class. You dread the sweat patches under your arms. You dread the summer, dread not having a jumper for protection. Dread having to raise your arm in class, dread people looking, people seeing your shame, those yellow stains that won’t wash out, won’t ever go away.

You don’t exist. That’s what you think. You don’t exist at all. You’re separated from everything, separated by a great distance, lost all the way back there at the back of your skull, miles from the world, back there in the cave of your mind, the cell, miles away from everyone and everything that’s passing you by. You peer out, the world in slow motion, the world so far away everything takes an age to reach you, takes an age for you to understand, to react, to respond. You want to shout back, because of the distance, because they might not hear you, might have forgotten you, because you really don’t exist you don’t have any presence you don’t even register you don’t you don’t you don’t.

You would deny your own name if you could.

You read Stephen King and and James Herbert and Clive Barker and Shuan Huston and Richard Laymon and Dean Koontz and Thomas Harris. You read novelisations of Doctor Who serials and Star Trek episodes and The Omen movies and Aliens and Star Wars. You read Terry Pratchett and Douglas Adams and Arthur C Clarke and Frank Herbert and Isaac Asimov. You read Tolkien and CS Lewis and the Iliad and the Odyssey and books about talking moles and talking rats and talking rabbits.

You read every page of teletext every day while eating breakfast, and then again after school, just in case anything has changed. You read the ingredients on boxes of cornflakes, packets of crisps, tins of beans, bottles of sauces, cans of drink. You read the labels in your clothes, the warning stickers on the backs of all your electronics, even the price tags on every item in the co-op. You remember them all.

You remember them all because you work there on Saturdays and there’s nothing to do but remember every item and every price and every customer that comes in. You work on the tills and you restock the shelves and you work in the stock room and you work out the back cutting up empty boxes and putting them in the skip. You don’t smile and you don’t talk and you don’t make mistakes and you get paid fourteen pound and fifty pence for 8 hours work every Saturday, or 9 hours work by your reckoning because of the hour for lunch that they don’t pay you for because you’re not working. But that hour’s not your own now is it, it’s not your own at all. It’s theirs. They’ve stolen it.

The grim reaper because of your thick black greasy hair like a cowl, your unsmiling face like a skull. Looking down at everyone, looming, looming.

The laughter hurts. You’re six foot two and you’re seventeen years old and they’re laughing at you and it hurts, it hurts. It always hurts. You borrow someone’s walkman and put the cd you bought that afternoon in and listen to it all afternoon instead of going to your lessons, the same three tracks over and over again until it’s time to go home and you want to cry but you don’t cry.

You read. You read everything. You’re seventeen years old and you hate yourself and you listen to music while you read. You read Irvine Welsh, James Kelman, and Iain Banks. You read On The Road and Naked Lunch. You read Dracula and Frankenstein and Doctor Jekyll and Mr Hyde.

You read maths textbooks, science books, Stephen Hawking and Richard Feynman and Roger Penrose and whoever else your older brother has books by. You read the dictionary, old encyclopaedias. You read books on chess and go and card games and dice games. You read the backs of video boxes and the sleevenotes of every album you own. You read videogame instruction booklets and the rules in all your boardgames and the operating manual for windows 3.1.

Hide your joy because it frightens you more than anything has ever frightened you.

You love it best when its winter. When its packed and it’s ended and you go outside and you can feel the sweat freezing on your body under your clothes, everyone standing around in clouds of frozen breath and cigarette smoke while you’re all trying to sober up before one of your dads comes to pick you up and take you all home and its finished again for a week, a month, back at home, back at school.

You hate you. You turn your fury inward and hate yourself, hate everything you’ve ever said and ever done. Hate yourself without respite. You sleep with your leg jammed between the bed and the radiator in the hope you’ll snap your knee ligaments while you sleep. You try not to look when you cross the road. You slice open your lip when you shave, and your chin, your cheeks. You hesitate with the blade at your neck. You wait until everyone has left the house and smash a glass in the sink in the hope it’ll slice open your hand. You want it to look natural. You want it to go unobserved. You don’t want to have to explain. You don’t want anyone to see.

You burst the blisters on your feet, peel the skin away in long strips until the pain’s to much, until the blood’s too thick, running too fast. You try to summon up the courage to break your own nose, to slice cuts into your own head, across your arms, into your own wrists. You never do.

Your sister finds a story you wrote. A story about committing suicide, a suicide note abstracted away as fiction, as a story, just a story. She reads it in front of you, to herself, in your room, the single most excruciating minutes of your life to date. Are okay? she says. when she’s finished. Are you sad?

You’re not sad. You’re never sad. Of course you’re not sad. It’s just a story you tell her. Just a story. You aren’t sad at all. She leaves you alone and you will never write a story again, never write anything down where it can be found, where people can see it, where people can read it and find it and find out how you feel. You’ll never let people see inside you and see what you are. Never again, not now. Not now.