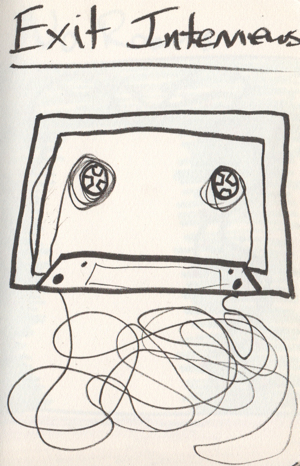 I’m afraid I don’t know where he’s gone. One day he was here and then he wasn’t here.

Did he leave a forwarding address or any way of contacting him?

He didn’t even leave anything in the fridge!

So you’re telling me that you knew he was a conman all this time and you did nothing and let him live here for almost a year watching him while he was watching us and didn’t even think to mention it until he’d disappeared again before you even managed to catch him and now you don’t know where he is and he’s probably just doing this all again somewhere else already?

This operation was fully agreed to and signed off by the relevant authorities. If you have any complaints about our methods, Miss, feel free to make them to the Mayor.

But no one even knows who the Mayor is!

The Mayor’s identity has been fully verified and signed off by the relevant authorities. If you have any complaints about these methods, Miss, feel free to make them to the Relevant Authorities directly.

And no one knows who the Relevant Authorities are either! Or where they’re located. Or what they do!

I assure you, Miss, that the Relevant Authorities existence has been fully confirmed by multiple sources a great number of times throughout the history of this town…

Well at least we’re getting all our stolen money back. But why did he spend a thousand pounds on my credit card just to send me a basilisk? What was the point of that?

We don’t know, exactly, Miss, but we’re looking into it.

That’s… I hope you mean metaphorically.

That still doesn’t explain what you were doing in the house in the first place, Ma’am.

The dolls! The dolls! I promised them! I did! I did! A witch keeps her promises! Not that you’d know anything about that, young man!

What you were doing could be considered illegal, Ma’am. If the houseowner –

Actually, Ma’am, under the terms of The Covenant (1643), it is explicitly a crime for a witch to sneak out of the woods and into someone’s house. If you’ll allow me to read from the Act….

I can’t believe he was recording us this whole time. Listening in to our private conversations. Watching us at school! Our lives becoming his entertainment! It’s just so… creepy!

I don’t care where he’s gone. Good riddance. I hope they never find him! Those rooms are mine now! MINE!

I dreamt I was a cassette boy and all my tape came out and got tangled in the wind and it looked a bit like a beard but it wasn’t a beard it was my brain!