A Bold Voyage Into The Unknown (first published in SXFX Issue #1, June 1995)

With Star Trek: Next Generation reaching its conclusion last year after nine glorious seasons, television has seemed a little duller in the interim. But now Star Trek is back with a new series, a new ship, a new crew, and even a new Riker. David N. Guy investigates.

It’s been a long year and a half since Star Trek: Next Generation finished. Something as successful as Star Trek was never going to be gone from our screens for long, but even so, television has seemed a little duller in the interim. Every Wednesday evening for the last 18 months has seen me pining by the TV, desperately longing for its return. But there’s also been a touch of fear in there, too — what if, when it returns, it’s all a bit of a disappointment? And with early word from the States that Star Trek: Voyager is unlike anything seen in the Trek universe before, my apprehension had been building for a while.

But all those worries were swept away when I was shown the first few episodes of Voyager at a special press event in London recently, and my fears were further assuaged in my subsequent conversations with returning Next Generation star Jonathan Frakes and the new series’ head writer, Christopher Priest.

When I explain to them how nervous I had been about the new series, Jonathan Frakes, especially, is sympathetic to my initial unease.

“We know we’ve got a lot to live up to with this. And although we knew we could just come back with the same old stuff — a new ship and a new crew but the same sort of adventures — we wanted to give everyone something different. So we spent quite a long time searching for something entirely different, something that would give us a whole new way at looking at Star Trek, while retaining the core experience that our fans all know and love. So we needed something not just with great characters and great enemies, but something that also went deeper than that.”

The backroom staff at the show had been working on ideas for a Next Generation spin-off series for some time, as far back as 1991 if some reports are to be believed. But no real progress was ever made and tension was said to be running high at Paramount that they would be without a successor when Picard et al finally hung up their uniforms in 1994 after an incredible 221 episodes. Just in time, however, the premise of the new series was brought to them by veteran British science fiction writer Christopher Priest.

“We were so excited when Chris showed up with these ideas. Everyone was a huge fan of his work, especially Short Circuit [winner of the Hugo Award for Best Novelisation in 1987]. That book was such a huge influence on Next Generation, not only on Data, obviously, but also on the slow expansion over the years of Majel [Barrett]’s role as the Enterprise,” says Frakes. “So it was a huge honour to discover Riker was central to his plans, as I thought my days on the show had come to an end [with the conclusion of Next Generation].”

“I’d always been fascinated with the transporters in Star Trek,” Christopher Priest announces. “How did they work? What happened to you when you stepped into the beam? Was that really you when you rematerialised on the other side? Or was it someone else? It seemed like every time you stepped onto that transporter pad you’d be crippled by some existential crisis, but no-one ever batted an eyelid and that seemed incredibly strange to me.”

But that all changed when he watched the sixth season episode Our Two Rikers, where it is discovered that a duplicate of Jonathan Frake’s iconic First Officer had been created in a transporter accident ten years before.

“That episode showed to me that my ideas about the transporter had been right all along. Yet still, in the episode, they both quickly come to terms with this scenario [of a duplicate Riker], and so does everyone else. The second Riker leaves for his new job aboard the Voyager and the next week everything’s back to normal and they all go back to being obliterated and reborn in that transporter beam without a second thought. There’s no thought to what they’re doing to themselves, and similarly, no thought to the actual potential of this incredible duplication device they have.” He shakes his head in astonished wonder. “But I couldn’t stop thinking about it.”

And so to Star Trek: Voyager. The set-up is this: while engaged in a battle with (long-running NG antagonists) the Cardassians in a disputed area of space, both ships tumble through a wormhole and find themselves stranded in an unexplored and hostile region of space thousands of years away from home. With supplies low, limited crew and the Cardassian ship beyond repair, the two long-time enemies decide to team up and work together on the Voyager for their long journey home.

Into this comes W. Thomas Riker. Still haunted by his ten years of solitude in Our Two Rikers, and faced with a small crew and the utter hostility of the territory around them, Thomas comes up with a terrible, essential plan.

“He takes advantage of the new situation on the ship to get himself in the position of having total control over the transporters,” Christopher Priest outlines. “And, using the knowledge he’sgained analysing his transporter accident all those years ago, every time a crew member transports off the ship, he creates a duplicate of them, which he keeps in stasis until the original — well I say original, but as we show they are both duplicates, there is no original — but he keeps one in stasis on the ship, and lets the other go down to wherever it is they’re going to that week. If the other returns safely, he can transport the stasis-held one out into space. But if there’s an accident on the planet, he can transport the perfectly preserved stasis body to the infirmary. Of course, eventually, this leads to a whole new world of problems, for both Riker and the rest crew.”

“Everything Riker does here is motivated by his desire to keep the crew safe,” Frakes explains. “But he knows that this plan of his is somewhat unethical, and so he does what he can to keep it a secret from everyone. It doesn’t happen straight away, but things eventually come to a head.”

In America the show is already into its mid-season hiatus, and from what we’ve heard so far this is quite an understatement. And although we don’t want to give away too many of the shows secrets, it’s certainly, shall we say, notable how many of the principle cast (Linda Hamilton, Jeremy London, Clare Buckfield, Kim Deal) just happen to be identical twins in real life.

As you can see from that list, Star Trek: Voyager also re-unites Jonathan Frakes with his long-time Beauty and the Beast co-star Linda Hamilton, a move that has certainly got fans talking.

“Its great to be working with her again,” Jonathan says. “We had such a good time on that show. Those.. was it four years? [Editor’s note: It was 2 years] They were incredible years for both of us, really.”

So, is there going to be any romance between your characters?

“That’s what everyone wants to know, isn’t it?” he chuckles. “But no, Riker, he might be a different man now, but he’s still the same Riker at heart. He respects the chain of command too much to try and romance a superior officer.”

Instead, W. Thomas Riker has his sights set on the returning Seska, in a continuation of the burgeoning on-screen romance between the characters towards the tail end of Next Generation’s run.

“Actually, it’s not a continuation of that at all. That was William Riker. Thomas Riker has never met Seska before. He was either trapped in that cave all the time, or on a different ship. So for him it’s entirely new. As for Seska, who knows what her true motives are!”

So with two characters from Next Generation in there so far, is there any scope for others to return?

“I’m not sure,” Riker admits. “It’d be great, but I’m not sure if any of them would have the time. They’re all quite busy these days, from what I hear. If you’ve won an Oscar [like NG’s Marina Sirtis did early this year for her lead role in Running Down That Hill: The Kate Bush Story] you’re probably not going to have much interest in going back to the grind of a weekly television series.”

There’s just time for one last question. Considering William T. Riker spent nine years as First Officer on the Enterprise, and now W. Thomas Riker is set for another long stint as Transporter Chief on the Voyager, is he ever going to get to sit in the Captain’s chair?

“I don’t know,” he sighs. “I really don’t. I’d like him to.” He pauses for a second and then smiles that wonderful Riker smile. “Maybe he can rig the transporters to duplicate the entire ship. Create ourselves an entire fleet out there in the Gamma Quadrant. An infinity of Rikers. Wouldn’t that be something!”

Star Trek: Voyager begins on BSB One in August, every Wednesday at 6pm.

Captain Elizabeth Janeway (Linda Hamilton) — An all-action Captain in the mold of Kirk, Janeway’s fierce demeanour and incredible fighting prowess make her a match for almost anyone.
Transporter Chief W. Thomas Riker (Jonathan Frakes) — Not the Riker we know, but still a Riker to love. But just what will the crew say when they find out what it is he’s up to with those transporters… 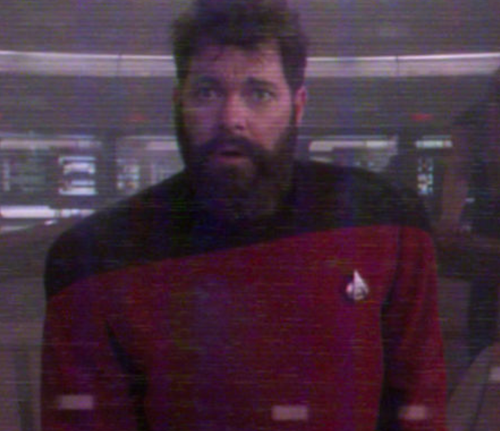 Lieutenant Chakotay (Michael Horse) — A tough but likeable senior officer, he is always the first to support Captain Janeway in whatever decisions she makes.

Science Officer Tuvok (Mae Jemison) — Another Vulcan science officer aboard a Federation starship, but this one’s played by an actual real-life astronaut.

Navigator Tim Paris (Jeremy London) — An ace pilot with a bad attitude, Paris is sure to be a new fan favourite.

Chief Engineer Belony Torres (Kim Deal) — A Klingon warrior who believes there is no greater honour in battle than that of repairing the warp coils while being showered in sparks.

Ensign Harrold ‘Harry’ Kim (Benedict Wong) — An inexperienced recent recruit who initially struggles with the responsibilities thrust upon him due to the heavy casualties aboard the Voyager. Distrustful of the new Cardassian doctor, he is currently working on a Medical robot of his own to replace him.

Gul Macet (Marc Alaimo) — Captain of the Cardassian vessel, he agrees to call a truce and to work with Janeway as her new First Officer.

Glinn Seska (Michelle Forbes) — Seska originally appeared in several Next Generation episodes as Ensign Ro Laren, a seemingly Bajoran crew member who is in reality a genetically altered Cardassian spy. Here we finally see her in her true Cardassian form in her new role as head of security aboard the Voyager.

Lamia (Clare Buckfield) — The last survivor of an alien race (the Espers) native to the Gamma Quadrant, Lamia possesses great, almost mystical, power in her tiny frame. Rescued in the pilot episode from her tyrannical slave master, Neelix (one of the series’ ongoing recurring villains, who wishes to use her powers for evil), Lamia’s extensive local knowledge helps provide the crew with important information on a weekly basis.

1. Written January and February, 2016
2. And first published in SXFX Magazine