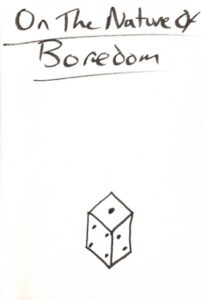 “Urgh,” said Claire, as she picked up the dice. “This is so boring!”

“You’re only saying that because you’re losing,” Ethel said.

“I’m only saying it because it’s boring!” Claire said, as she threw another 1 (her seventh in a row). “I’ve had dreams more interesting than this!”

“We’ve all had dreams more interesting than this,” Ethel said.

“Because dreams are amazing,” Tina said.

“No they aren’t,” Claire said, as she moved her piece one place forwards onto the hexagon that said ‘Move 1 place backwards’. “They’re awful.”

“I dreamt I was a car,” Daniel said. “That could turn into a much smaller car.”

“See?” Claire said, as she moved her piece one place back for the seventh consecutive time. “I told you dreams were boring.”

“It’s not,” Claire said, as she threw the board on the floor. “What’s the point of a car that can turn into a smaller car. It’s useless.”

“When I run out of road,” said Daniel. “I can drive on the pavement.”

“That’s illegal,” Claire said, as she kicked the table over for good measure. “Not to mention BORING!”

The game was declared a draw.