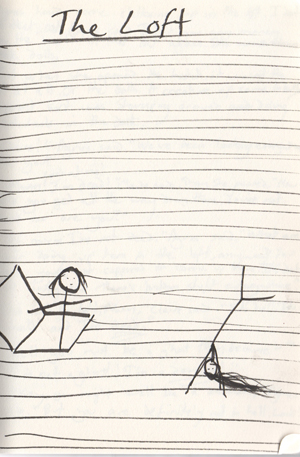 Agnes heard something clattering around up in the loft. I bet it’s that cat, she said to herself. I bet you any money in the world it’s that cat again. It’s worse than the dolls.

But when she opened the hatch, it wasn’t the cat at all. Or the dolls. A creature of some totally different sort was stomping around and doing cartwheels in the dark.

“Claire!” Agnes said. “We’ve been looking everywhere for you!”

“Mum! Look at me! I’m dead!” Claire said, and did a cartwheel to prove it. “See?” Then she paused for a second. “Wait, how did you get all the way down there, Mum? You’re not dead too are you?”

“Of course I’m not dead, Claire,” Agnes said. “I’m just tired. Now what are you doing up here in the loft, anyway? You know you’re not supposed to come up here on your own. It’s dark and dusty and there’s broken stuff everywhere.”

“Well you must be a ghost then because – ”

“Well, okay, I can believe that,” Agnes said. “But you are definitely not in hell. Look!”

Agnes turned the light on and Claire saw that she really was in the loft. You could tell because there were rolled up carpets everywhere and the Christmas tree was in the corner and there was a big box of Dad’s things that no-one had the heart to throw away. Claire didn’t think even the devil would want a box of Dad’s old books and maps and things. In hell it was so dark you wouldn’t even be able to read.

“Oh,” Claire said sadly. “I really thought I was in hell.”

“You still haven’t told me how you got up here,” Agnes said.

“We don’t have a slide under the stairs.”

Claire climbed out of the hatch onto the landing, then clattered down the stairs to the hall as loudly as she could. A few moments later Agnes heard some cries from below, then above and below, and then finally from above only. Claire fell out of the shadows and landed on the floor with a triumphant ooof.

“I suppose this means we’ll have to leave the lights on up here now,” was all Agnes could think to say to all this. Nothing this house did should surprise her any more, but a mobius slide was certain something new. “Anyway, at least you’re not dead, Claire.”

“I loved being dead, Mum,” Claire said. “I can’t wait until I’m dead for real. It’s going to be so much fun! I’m going to haunt everyone!”