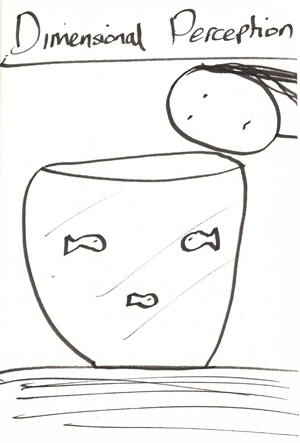 “Do you think they can see us?” Daniel asked, as he peered in at them through the glass.

“I hope not,” Tina said. “How would you like it if you looked out the window and some strange giant was staring in at you?”

“That’d be so weird,” Daniel agreed.

“Anyway, of course they can see us,” Claire said. “They’re goldfish no blindfish!”

But what if their brains can’t even perceive our existence?” Tina said. “Like those frogs that can only see flies if they’re flying around like flies?”

“Those frogs are stupid!” Claire said. “My goldfish aren’t stupid.”

“Imagine if there’s things out there watching us right now that we can’t perceive,” Daniel said, as he peered slowly out the window. “Just because they don’t move like people!”

1. Written on May 4th, 2021
2. I just realised that this is basically the end of that Moriarty episode on Star Trek
3. But with goldfish