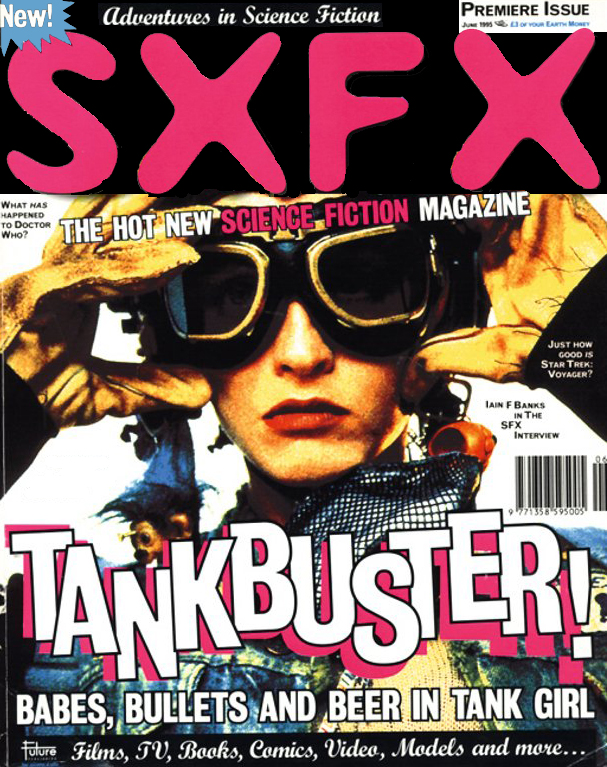 Since 1988, Tank Girl and Jet Girl have been tearing up British comics with their full frontal assault on good taste, decorum, and anything else that stands in their way of a good time. On the set of the hotly anticipated film adaptation in Australia, Esmerelda Brautigan meets up with the film’s co-stars Naomi Watts and Lori Petty, who prove to be every bit as irrepressible as the characters they’re portraying onscreen.

Since its first appearance as a throwaway page filler in Deadline in 1988, Tank Girl has been an unexpected phenomenon, going from underground indie comic hit to sudden mainstream sensation within little over a year, and then barrelling forward with an ever-increasing sense of momentum ever since. And now Tank Girl mania has perhaps reached its culmination with the imminent release of the big-budgeted, long-awaited, Hollywood film adaptation. On its release last month in America it broke several box office records, and all the early indications are that it’s going to do the same when it releases here in the UK this month.

When I meet with the film’s two standout stars, Lori Petty (Tank Girl) and Naomi Watts (Jet Girl), it’s the very last day of scheduled re-shoots for the film, but even then the sense that this was going to be something big was nigh-on unshakeable. It’s a blisteringly hot day outside in this deserted part of New Mexico, and we’re all huddled up in a trailer, trying, desperately, to keep ourselves cool with bottles of beer from the fridge.

“Someone forgot to film the climax, or something,” Naomi explains. “Like, they literally forgot to turn on the camera.”

“There was talk they could fill in the gap with a cartoon,” Lori sneers. “Imagine that — a fucking cartoon instead of the end of the film.”

“But luckily the artist hurt his wrist.” Naomi mimes a rude gesture.

The plot of the movie revolves around a quest for justice in the arid wastelands of post-apocalyptic Australia, an odyssey that leads ultimately onto a showdown with the nefarious warlord Kessel, played by Terrance Stamp (who has, for reasons best known to himself, refused to do any publicity for this movie). But the plot, truth be told, is fairly irrelevant, and what we get instead is a fast-paced series of often disconnected set-pieces, vignettes, interludes, and Saturday morning cartoon-style segments, and this energetic melange creates an atmosphere of free-wheeling anarchism that perfectly captures the essence of the characters. A flat, standard A to B plot just wouldn’t have cut it.

A point with which Tank Girl herself agrees.

“One of the things that I loved about the script was that it just went straight in there — BANG — and got going and never let up,” blasts Lori. “There’s no backstory explaining exactly how and why the world’s all fucked up, no tedious explanation about how she got her tank-”

She waves her hands around until eventually Lori Petty finishes her thought for her.

“…this fucking drip-drip-drip of story. Just fucking getting into it — a couple of girls in the desert with their heavy artillery and their ‘fuck you’ attitude.”

“And we do!” shouts Lori, and the whole room collapses into dirty giggles.

The look of the film, and especially the costumes, is one of the most striking aspects of the movie, and one of the things Lori and Naomi are both especially pleased with.

“The thing is, if a guy made this — and I’ve nothing against guys, obviously, I’ve met some nice ones, you know? — but if a guy made this, they’d get the look of it wrong. It’d just be them playing dress-up, getting us to put all these outfits on for their fucking pleasure. Whereas this — there’s like a hundred odd costume changes the pair of us go through in the film — ”

“Yeah but she got cut, didn’t she? Cut. The fuck. OUT!” They both laugh at this for a while, before Lori gets back to the point she was making. “There’s a million costumes and outfits but they’re our fucking costumes, you know. Our fucking outfits. We look great but we look great for us. We could care less whether all these fucking men in the wasteland — in the audience — find us sexy.”

Me and Naomi both laugh at this one but Lori remains quizzically silent.

“Who the fuck is Sindy?” she demands

“She’s like Barbie. But better obviously,” Naomi explains. “Maybe you had to grow up in Wales…”

“I thought you were fucking Australian?!” They both glare at each other for a second, and then burst out laughing once more. “Anyway, I don’t think Mattel wanted to produce any Tank Girl toys, the useless fucking fucks.”

There’s a scene in this movie where Tank Girl and Jet Girl infiltrate a 1920s art-deco style brothel in the wastelands that culminates in a great Broadway-style singalong, and which for many exemplifies the strengths of the film.

“We wanted to undercut that whole macho fucking culture of old rock, even of punk. All that shitty stuff, you know, getting groped at gigs, groupies, all that fucking shit. Iggy Pop was desperate to be in this film, and everyone was like, ‘Yeah, well there’s this part you’d be perfect for’ and it’s as a paedophile!”

“I don’t think he got that joke either,” says Naomi. “If it even was a joke.”

Indeed, the Tank Girl film has an incredible soundtrack [see box-out overleaf] put together by Grunge superstar Courtney Love, and for Lori Petty, getting to meet one of her heroes was a highlight of the entire production.

“Hanging out with Courtney was so much fucking fun! It was back in pre-production, in London, that we met her. She took us to Glastonbury [Editor’s Note — it was actually Reading] and it was so exciting. She beat up this one guy for wearing a t-shirt that said ‘Not sleeping around.’ It was hi-lar-i-ous. ‘Why aren’t you sleeping around? Why? Why?’ She was shaking him around and he looked so scared. Me and Naomi couldn’t stop laughing for hours about it.”

“I thought it was a bit much, actually,” Naomi Watts says, looking a little bit sheepish.

“Hey, you were the one that kicked him in the balls!”

“She ended up running off with Tracy [Marrow, who plays the mutated kangaroo Booga in the film] and we didn’t see her again.”
“Someone said they’re going to make an album together,” Naomi reveals.

“Yeah, he’s a fucking rock star now. None of this acting shit anymore.” Lori takes a swig from her bottle of beer. “Maybe we put him right the fuck off.”

“We?” pleads Naomi. “Don’t try and rope me into this. This is all your doing!”

Explosive hits that will blow you away!

Even here, three months out from release, the intensity of the hype and desire for this film is incredible. Everywhere you go there’s people talking about it. You can’t turn on the TV without seeing it being discussed, dissected, vilified and vaunted in equal measure.

So one last question, did you know what you were getting yourselves into when you signed up for this?

“We did,” says Tank Girl. “We definitely fucking did.”

“And we love it,” agrees Jet Girl. “It’s fucking brilliant.”

One of their assistants pops their head round the door and tells the two of them they’re needed back on set for the last few hours of filming.

“Let’s go blow something up!”

And they do. Or will. With Tank Girl they’re going to leave the entire world aflame in their wake.

1. Written January and February, 2016
2. And first published in SXFX Magazine